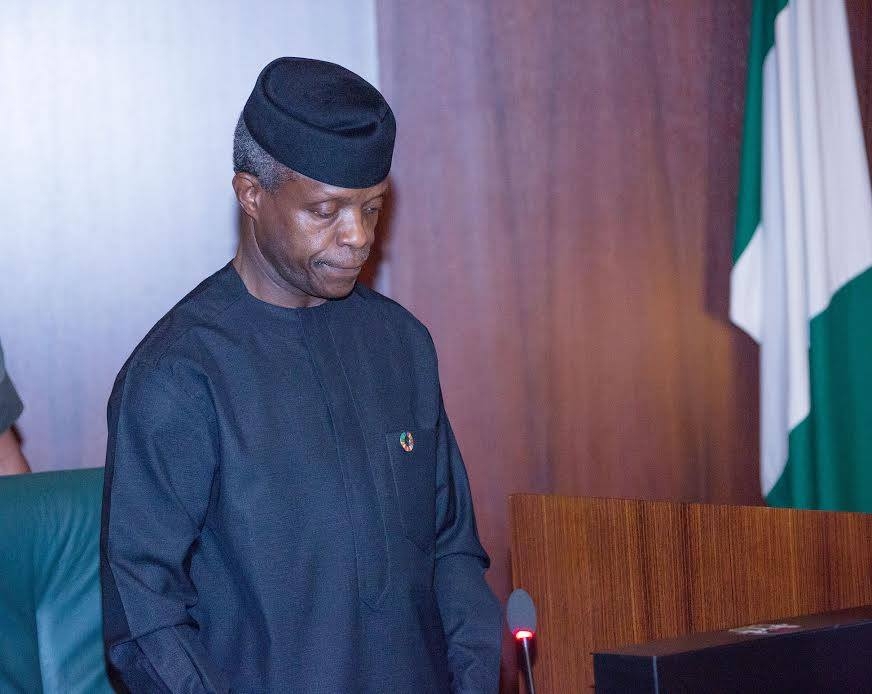 TheNewsGuru.com (TNG) reports Osinbajo tweeted about it on Sunday, sharing a photo in which he was seen with a walking stick.

The Vice President expressed special appreciation to the team of surgeons, doctors, nurses, physiotherapists, and the management of the Duchess International Hospital Lagos, for providing him care.

“My deep gratitude to everyone for your get-well wishes and prayers following my surgery. And special appreciation to the amazing team of surgeons, doctors, nurses, physiotherapists, and the management of the Duchess International Hospital Lagos, for providing such excellent care. God bless you all,” Osinbajo tweeted.

And special appreciation to the amazing team of surgeons, doctors, nurses, physiotherapists, and the management of the Duchess International Hospital Lagos, for providing such excellent care.

God bless you all.
~Y.O pic.twitter.com/qZoJY1wTnm

TNG reports Osinbajo was admitted to Duchess International Hospital, GRA, Ikeja, Lagos on July 16th on account of a fracture of his right femur (thigh bone), possibly related to a longstanding injury associated with a game of squash.

For the benefit of hindsight, the vice president, in 2021, inaugurated the Duchess International Hospital, a subsidiary of the Reddington Hospital Group.

The Duchess International is a state-of-the-art, purpose-built, fully ensuite 100-bed hospital facility; its services range from primary, secondary to tertiary healthcare services across a wide range of specialist and subspecialty areas.

Ever since Osinbajo’s successful surgery in the local health facility, insightful Nigerians have been applauding the vice president for exhibiting a high level of patriotism and belief in the Nigerian project.

No doubt, the issue of curbing medical tourism has featured prominently in national discourse over the years.

Estimates indicate that Nigeria loses between one billion dollars to two billion dollars annually in capital flight to medical tourism, while over 40,000 Nigerian doctors are practising in the Diaspora.

Earlier, the Nigerian Medical Association (NMA), as a major player in the health industry had implored other political office holders in the country to emulate the vice president in order to end medical tourism.

Ojinmah added that it was time to fix the nation’s fragile healthcare system to the benefit of the common man and the economy. He added that the association was certain that Osinbajo was impressed.

“We wish to thank God for seeing our vice president through surgery. All Nigerian doctors are praying for his quick and complete recovery,” he said.

Nigerians laud Osinbajo for use of local hospital for surgery

Also, a cross-section of Nigerians has also hailed Vice President Yemi Osinbajo’s openness about his health status and his choice of medical care in a local hospital.

Reacting, some Nigerians went on social media to commend the vice president’s choice of a local hospital for a medical procedure and wished him a quick recovery.

Ken Osemebor on Twitter reacted thus: “I was scared you wanted to refer to that helicopter crash…. I hope it’s something minor.

Kemisola Adekunle, in her tweet, said “I am sure it is not too serious. But kudos to the vice president for trusting in his doctors here at home and not having to fly abroad for treatment. It shows his believe in Nigeria medical doctors”.

Another Nigerian simply known as Chika on twitter said “speedy recovery sir. Noteworthy that he’s using a local hospital and local doctors. Talk and do.”

Also, Tamuno Tonye wished “quick recovery to the senior advocate of masses who believes in everything in Nigeria, owned by Nigerians and for Nigerians.”

He added, “our medical services has proven to be world class for all citizens irrespective of their societal class.”

Right activists, Aisha Yesufu and Henry Sheild were also not left out as they prayed and wished the vice president  speedy recovery.

Shield wrote: “may the Lord Almighty heal you and hold the hands of the medical staff all through the procedure.

“You will come out stronger and healthier in Jesus name. You are in our prayers.”

On her part, Yesufu prayed “may God heal you completely.”