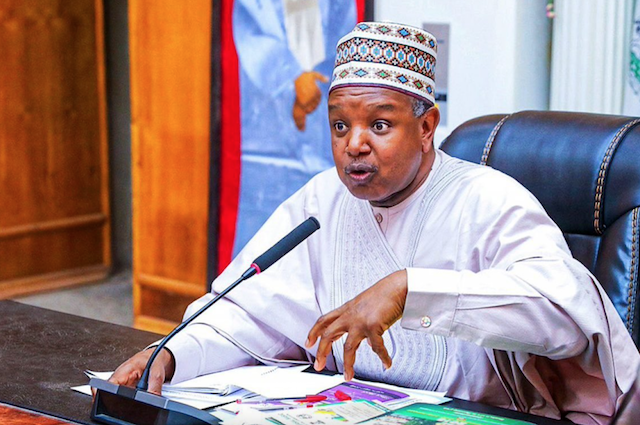 Gov. Atiku Bagudu of Kebbi State has urged Nigerians to repent and intensify prayers to end the lingering insecurity bedevelling the nation.

Bagudu made the appeal at a Walima (Dinner) organised to celebrate “Kebbi @ 31”, held at the Presidential Lodge, Birnin Kebbi on Saturday.

The Walima, which was organised by the Kebbi State Government, drew Ulamas (Islamic clerics) from different Islamic sects to preach and offer special prayers for restoration of peace across Nigeria.

International police, WAPIS to team up to tackle insecurity in the country

Bagudu, who was represented by Alhaji Babale Umar-Yauri, the Secretary to Kebbi State Government (SSG), said the state decided to celebrate the 31st anniversary in a different way.

“We decided to invite Ulamas to preach to us, remind us about Almighty God and pray for peace to reign across Nigeria,” he said.

The governor lamented that banditry, rape and kidnapping were alien vices infiltrated into Nigeria, assuring that with prayers, they will soon be a thing of the past.

He observed that the herculean task leaders faced was something people should pity them for, hence the need for people to understand that the work “is not as easy as one thinks”.

While appreciating the Ulamas for their contribution to the success of the state, Bagudu also appealed to them to sustain the tempo.

Earlier, several Ulamas who preached at the Walima, reminded people as well as leaders of the need to be mindful of their responsibilities.

Taking their texts from the Quar’an and Hadith, the clerics enumerated some qualities of a leader to include humility, humbleness, consultation before taking decision, leniency, fairness and justice.

The clerics stressed the need for followers to be obedient and respect all constituted authorities to enable leaders discharge their responsibitues diligently.