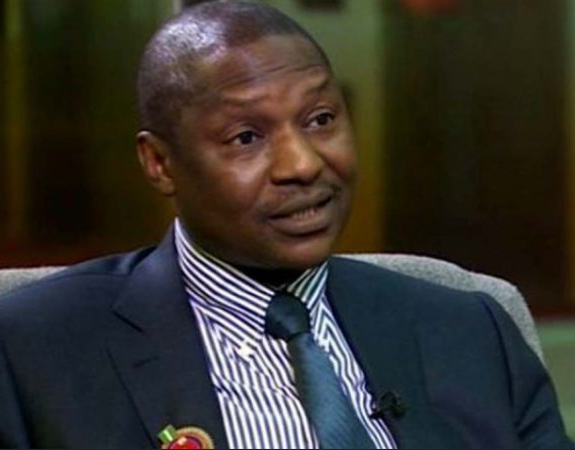 1.4k
The Attorney-General of the Federation and Minister of Justice, Abubakar Malami, SAN, has restated his commitment to complementing the efforts of Federal and State Governments in providing higher quality education in Kebbi.
Malami made this known during a prize-giving day of Rayhaan Model Academy Birnin Kebbi on Saturday.
He described the establishment of Rayhaan Model Academy as part of his contribution to complement the efforts of the governments in stabilising education in the state.
“This informs the decision to have a trailblazer model academy, Rayhaan Model Academy Birnin Kebbi.
He said the school was established out of the aspiration to complement government’s effort in the promotion of quality education for the country.
Malami expressed optimism that the academy would produce high Calibre of intellectuals in  universities who would join the wider competitive global society.
“I hope in the nearest future, the students from the academy will  contribute immensely in the fields of engineering, medicine, industries, administration and entrepreneurship, among others,” he said.
Malami commended the parents and guardians for entrusting the care of their wards in the academy and promised to ensure that their dream had come to fruition.
The minister also appreciated both teaching and non-teaching staff for their contributions to the development of the academy.
Earlier, Dr Nasir Idris, the APC governorship candidate, lauded the tremendous contribution of Malami to educational development and service to humanity in the state.
He said that the name of the minister would be written in gold as a politician per excellence and unique philanthropist.
Idris said his political journey would not be complete without the minister.
The Chairman, Board of Directors of the Academy, Malam Isiyaku Abdullahi, disclosed that the academy had graduated 102 students in the event out of 405 students currently in the school.
“The school has become one of the best in the state within such a short period of operation and the choice of many children and parents in the state,” he said.
The News Agency of Nigeria (NAN) reports that Alhaji Bashar Illo, the Chief Launcher at the event, donated  N5 million;  Alhaji Garba Illo and his relatives  donated N5 million and Dr Nasiru Idris gave N10 million.
Others are Khadimiyya For Justice and Development Initiative which donated  a mobile science laboratory with N1 million.

2023: Tinubu not contesting on the basis of greater good - Dino Melaye