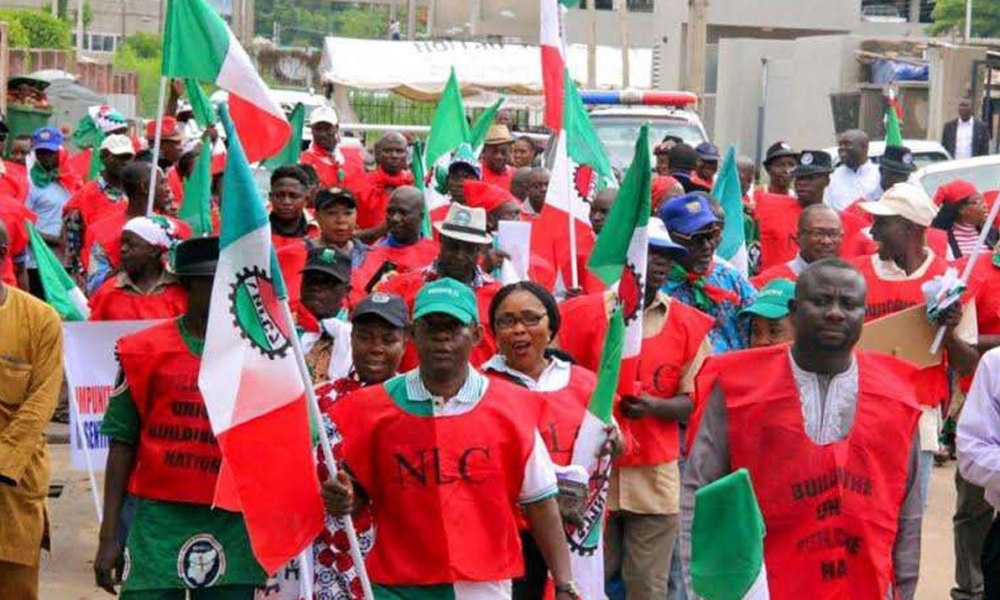 But as the world marks the 2021 Workers Day today, it is clear that, in Nigeria at the moment, very little of the fate of workers especially those at the subnational (state) seems to be worth celebrating. With the current economic reality in Nigeria where the movement of goods and services is completely at the mercy of the stabilization fuel price, the collapsed Naira value and the mounting insecurity, one will agree that the non-implementation of the new minimum wage by some state governors and the deliberate “robbing Peter to pay Paul” strategy employed by other governors, calls for national empathy for the Nigerian workers today.

From Kaduna to Kano, Zamfara down to some north central states, up to some southern states, it’s been one excuse or the other.  It is either threat of sacking state civil servants or deliberate non-payment of their wages as ordered by President Muhammadu Buhari sanctioned new wage law.
President of the Trade Union Congress of Nigeria (TUC), Quadri Olaleye, in February this year noted that some of the states found wanting include Benue, Cross River and Ekiti. Some others have only implemented the new wage for workers on levels one to six with backlogs of arrears on promotion. Enugu, Gombe, Imo, Kogi, Kwara, Nasarawa, Ogun are with huge remittance on deductions. The story is not different in Oyo, Plateau, Rivers, Taraba, Kano, and Zamfara.

In Kaduna, Governor Nasir El-rufai, recently announced his notice of disengagements of workers in the state public service. According to Governor El-Rufai in a statement made available to ThenNewsGuru.com, TNG on April 13 this year, his administration being the first to implement the new minimum wage in September 2019 is now faced with a significant increase in wage burden.

“While the Kaduna State Government believes that public sector wages overall are still relatively low, their current levels are obviously limited by the resources available to the government. What each public servant earns might be puny in comparison to private sector wages, but the total wage bill consumes much of the revenues of the state.” El-Rufai said.

“The desire to pay more is a sentiment that must bow to the limits prescribed by the ability to pay….Therefore, the state government has no choice but to shed some weight and reduce the size of the public service”. He added.

This has sent cold shivers down the spine of a lot of the workers in the state who are battling with the vagaries of the current harsh economic reality in the country and in their state. The security threats from bandits which has made Nigerian farmers not to be  able to engage in farming and other agricultural activities which they are known for, has added to the fears of the workers.
Although Governor El-Rufai promised to ameliorate the expected effects the disengagements may cause on the affected workers, however, marrying words with action has always been the bane of the average Nigerian politician.

In Kano, Governor Abdullahi Ganduje just recovered from a mild rift with labour over non-implementation of the new minimum wage and his deliberate deduction of workers salary in March 2021. After a day-long negotiation on April 8, labour shelved its decision to embark on a warning strike after the governor and his team promised to refund the deduction they did in March. However the old minimum wage of Eighteen Thousand Naira (N18,000) is what the Kano state workers have to make do with for now.

In Taraba, Governor Darius Ishaku had to make a pledge of working out modalities to start paying the new minimum wage between April to June before the workers ended the over two weeks strike they began on March 22 this year. The Taraba workers expect the governor to get back to them by June this year as promised. The also told the governor to stop hiding under the Coronavirus Disease (COVID-19) crisis to deny them their right of the new national minimum wage.

Currently, on the good books of the Nigerian Labour congress are; Borno, Delta, Ebonyi, Edo, Jigawa, Kaduna, Katsina, Kebbi, Lagos, Ondo, Sokoto, Yobe and the Federal Capital Territory (FCT) who have commenced the implementation of the new minimum wage.

As Nigeria marks the workers day today, it is hoped that other state governors will be moved to motivate their state workers who have been the backbone of their various stewardships.

This year’s Workers Day will particularly commemorate the efforts of Nigerian Workers throughout the COVID-19 crisis, where their importance in the smooth running of healthcare and other sectors of the economy has been highlighted globally.

Pantami needs to step aside for investigation – PFN leader