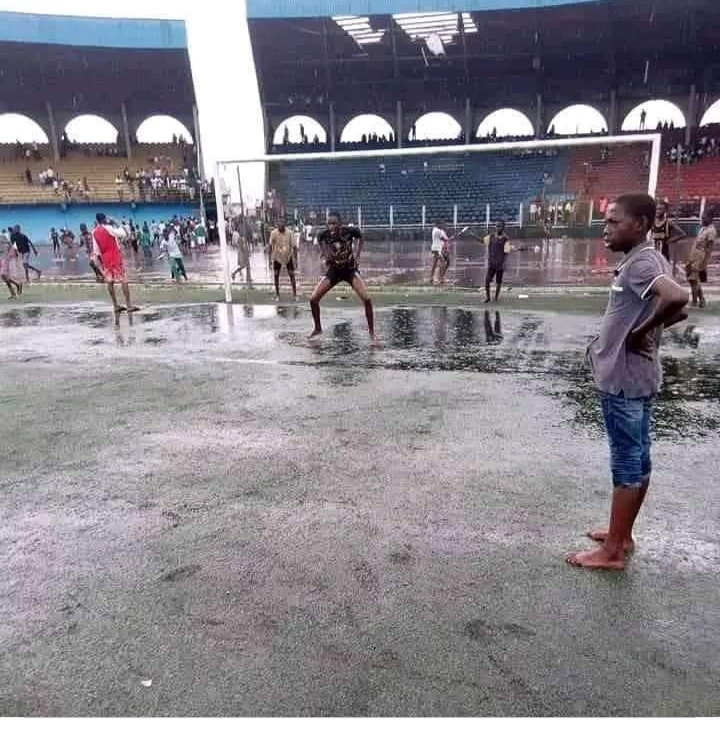 Popular Nigerian Master of Ceremony, Tive Okpako who is famously known as MC Olokpa has berated the Delta state government both past and present for their continuous neglect of the Warri stadium.

Olokpa noted that the stadium used to be a beautiful sight to behold and envy of all in the country.

The Warri-based comedian noted that the Stadium boasted world-class facilities that could favourably compete with many other stadia in the world.

He stressed that the facility hosted many international and local football competitions, adding that the Super Falcons of Nigeria played and won the WAFCON trophy there many years ago.

”For anybody that grew up in Warri and has gone to Warri stadium back then for one reason or the other. Either to attend a children’s day celebration, watch a football match, or for fitness and going back today will realize what bad governance can do to the dreams of a people.

”Today Warri stadium stands as a symbol of government failure for 7 years or so. This place was the pride of waffarians.

”A place where super falcons lifted most of their trophies. A place where our junior National teams conquer their opponent.
”A place where we sing our heart out in support of our team. Home to our proud team, Warri Wolves.

”We enjoyed great marches,  we saw our homegrown talents coming back home as part of the national team. A uniting avenue for all the tribes. We watched great halftime performances from Oritse Femi, APALIKU. (sic)

“We go flog politicians Koboko” when the likes of Ibori were in the stadium will be evergreen because of the reaction from the crowd that day.

“What a city, what a people, and what a stadium. Businesses strived within and around the stadium.
Warri stadium was like home to everybody.

”But as it stands today, that place we all once called home is now home to reptiles, cattle, and all what not. (sic)

”It’s a shame indeed that we are pretending that we didn’t have that. We are all pretending as if it has not affected our homegrown talent moving Abroad. Aside from Oghenekaro Etebo, which other core waffarians can we point to today in football. Driving Keke is now the last option for our footballers.

”My heart bled when the former goalkeeper of BISILO was caught as a Keke robber. What a great goalie I enjoyed watching in Essi college

”I still remember Jokpa and Believe, two brothers playing 5 and 6 in Omas united. The likes of Late Robert, Kalawowo, and gift just to mention a few.

MC Olokpa further revealed that politicians will start to besiege the stadium for campaigns and start to give fake promises.

‘Warri had nightlife but today we rush home before 10 pm

“Warri roads weren’t this bad but we have moved from bad to worst.

”Warri had some companies but we are left with non.

”Yet this year and next, the stadium will be cleaned up and as usual, we are going to receive them with open arms for them to come to lie to us again.

“If you want to know how bad Warri has become, just go to Warri stadium.

”You don’t need to Enter through the gate, just stand from the fence and see the decay.

‘To those selling off our rights for a plate of beans, I hope you are proud of the state of this city.

”I hope you are enjoying the darkness and insecurities”

Olokpa enjoined the people of Warri to put all hands on deck to ensure the restoration of the city.