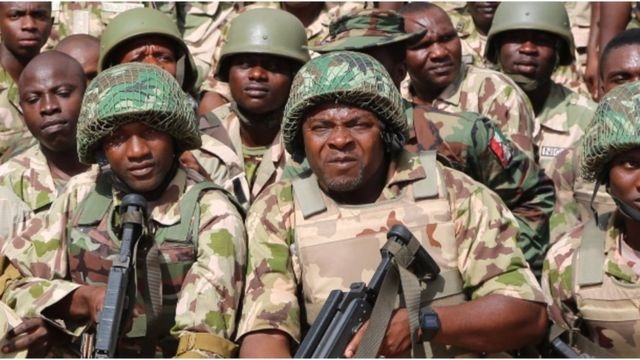 Troops of Nigerian Armed Forces operating in North West, North Central theatres of operations have eliminated over 45 terrorists/bandits in both land and air operations in the last two weeks.

The Director, Defence Media Operations, Maj.-Gen. Bernard Onyeuko, made this known at a bi-weekly news briefing of the Defence Headquarters on Thursday in Abuja.

He said the air strike was carried out during the terrorists meeting on Aug. 8 based on credible intelligence.

He said the airstrike led to the killing of Shanono with 18 other terrorists, adding that 30 AK47 rifles and 20 motorcycles were destroyed in the attack.

Onyeuko said that as a result of the operations, 45 kidnapped civilians were released.

Onyeuko further said that troops of Operation Whirl Stroke arrested some notorious criminals who had been on the wanted list of the theatre command.

He said Nathaniel Azege, who had been terrorising Makurdi town was apprehended as well as Moses Aindigh (27) and Mr Iluyasu Mohammed (37) during the period.

He said the air component of Operation Hadarin Daji had on Aug. 6, carried out successful strikes on key terrorists enclave and hideout located at Rudu forest in Katsina State.

According to hin, the air interdiction led to the neutralisation of a high profiled terrorist leader who has been on the wanted list of the military named Alhaji Abdulkareem Lawal (a.k.a Abdulkareem Boss) and his foot soldiers.

“Credible intelligence report revealed that he was responsible for several terrorists’ attacks, animal rustling and kidnapping and was also known to regularly invite terrorists group from other areas and regions to join in the attack on his targets.

“Report gathered from the locals revealed that the terrorists leaders were neutralised alongside 27 foot soldiers,” he said.

Onyeuko further revealed that troops had between July 31 and Aug. 2, arrested one Malam Yahaya a notorious bandit informant who had been on the tracking list of the Department of State Security for collaborating with bandits on the numerous attacks in Sabon Brini general area of Sokoto State.

According to him, the troops also recovered 161 cattle, eight camels, large consignment of clothing from terrorists after an encounter in Zango in Shinkafi Local Government Area.