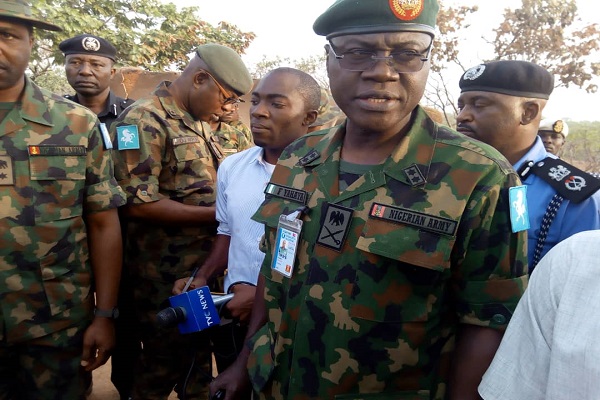 Chief of Army Staff (COAS), Lt.-Gen. Faruk Yahaya, stated this on Friday in a good message he sent to the send-off ceremony and regimental dinner night in honour of 14 retired officers of the ranks of colonel and below in 1 Division of the Army.

He was represented on the occasion by the Commandant Depot, Nigeria Army, Maj.-Gen. Aminu Chinade.

Lt. General Farouk said the occasion was conceived out of the desire to accord a befitting send- off ceremony to all personnel that served the army and the nation meritoriously and were retiring from active service.

According to him, retirement is an inevitable phase in the life of every military personnel and it marks the completion of active service to the nation.

Thenewsguru.com quoted him as saying; “I must commend you all for the remarkable achievement you made while in active service to the nation.

“I wish to also assure you that Nigerian Army remained grateful for the service you rendered in the defence of our fatherland.

“I will like to take this opportunity to inform you of ongoing efforts to re-engage the services of our qualified retired and discharged personnel in order to continue to benefit from your wealth of priceless experience and professionalism garnered over the years.

ALSO READ:Retired Argentine Bishop to spend over 4yrs in jail for sexual abuse

“The army is still open to your invaluable contributions towards attaining her constitutional mandate and would always welcome your support in that regard,” he said.

The Army chief who informed the retired officers that the army health facilities and other welfare institutions were available to them in various barracks and cantonments across the nation, urged them to take advantage to enhance their well-being even after service to the country.

Lt. General Farouk implored them to fulfill their obligations, even as retired officers, towards defending the territorial integrity of Nigeria, as espoused in their oath of allegiance.

“I also urge you all to shun all forms of misconduct or actions capable of bringing the army into disrepute in retirement, as you are seen as worthy ambassadors of the Nigerian Army.

Speaking, the Guest of Honor, Maj.-Gen. Mahmud Yarima (rtd), emphasised that retirement was a gratifying phase in the life of every military personnel.

Yarima, erstwhile Commandant, Nigerian Defence Academy, said retirement was a milestone which was worth celebrating and cautioned the retirees on how to use their entitlements, as there were many fraudsters prowling for those to defraud.

“You must be careful of falling victims of their fraudulent activities, they have misled many of our colleagues and the outcome has not been pleasant.

“All I need to say in this regard is that you must ‘shine your eyes’, ” he said.

Also, the General Officer Commanding (GOC), 1 Division, Nigerian Army, Maj.-Gen Kabir Mukhtar, said this historic event signified another milestone made by the administration of the COAS in his zeal to upholding regimentation of the Nigerian Army.

Mukhtar said the four vital elements of the COAS administration, professionalism, readiness, administration and cooperation were aimed at running an all-inclusive Nigerian Army at all levels.

He said: “Today, we are here to celebrate and honour our retired officers who in many ways have contributed to the Nigeria Army in particular and the nation in general,’ the Newsguru.com heard him say.

Referendum on a Hegemony – By Chidi Amuta

Children orphaned by insurgency are mine – Sultan

Children orphaned by insurgency are mine - Sultan