The UK has reached an agreement with Nigeria, to deport all illegal migrants from the country, as part of efforts to strengthen its recently approved Border’s Act.

Apart from those who are smuggled into the country, Nigerians who work or study on a tourist visa, as well as those who entered the UK with false documents or have overstayed their visas, would face increased maximum sentence and deportation.

In a tweet on Friday, the Home Office announced both governments will work more closely to support safe and legal migration, tackle illegal migration and ensure speedy deportation of people with no right to be in the UK.

“Our new landmark agreement with Nigeria will increase the deportation of dangerous foreign criminals to make our streets and country safer,” Home Secretary Priti Patel said. 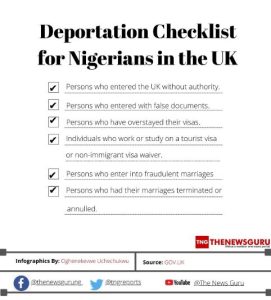 Under the agreement, both countries will issue emergency travel certificates or temporary passports within five days in order to speed up removal.

Operational teams in both countries will also share their expertise to take the fight to criminal people smugglers who put profit before people while undermining the security of both countries.

The UK which has sought to step up its efforts to tackle illegal immigration in recent months, already deported 21 people on Thursday, including 13 Nigerians who it said had no right to be in the country.

Some of the deportees had combined sentences of more than 64 years, for crimes such as rape and sexual offences against children.

Earlier this year, Patel signed a partnership with Rwanda to send asylum seekers to the East African country for processing with hopes it would deter people from making the dangerous journey across the English Channel in small boats.

In 2021, French and UK authorities prevented more than 23,000 attempts to travel illegally to the UK.

Over 6,000 crossings have been prevented so far in 2022, more than twice as many as at this point last year.