...challenges authorities to change the narrative 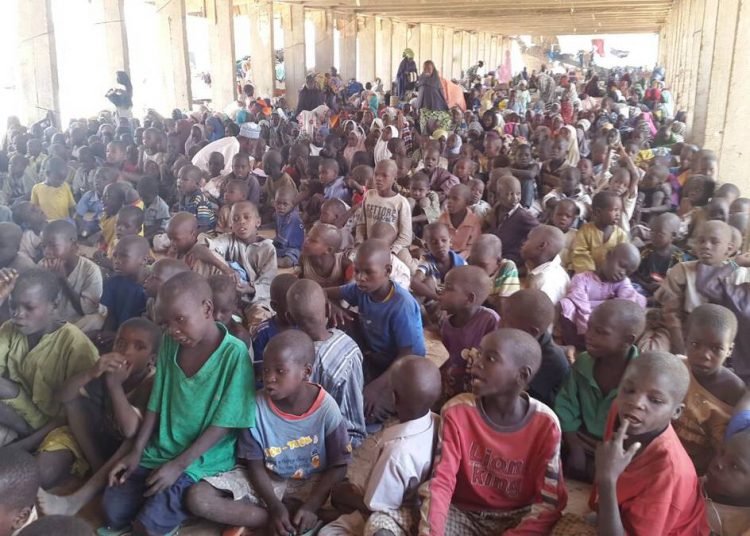 A university don, Prof Stanley Udedi has alerted the authorities that the daily burgeoning Nigeria’s out-of-school children which is presently standing at 14.5million are potentially handy recruits for the Boko Haram, ISWAP and the so-called Unknown Gunmen.

Udedi who spoke as one of the guest lecturers at the Awards Ceremony, National Convention and launching of the N75million Youth Empowerment Scheme of the Mass Movement for Good Governance (MMG) in Awka, Anambra State, further disclosed that the school period the recruits lost would now be converted into the period of their arms training in the wild.

C9nsidering their background, Prof Udedi who is from the Faculty of Biosciences, Nnamdi Azikiwe University noted that no lecturers, professors or civil servants could be seen in these infamous groups as members. That their members were those who are unemployed, the jobless and street kids who have no money to feed family. “They can’t even get married, so because of that they were easily harvested by these groups and were even told they would go to heaven and that they would do this and that at the end of the day.”

The don therefore asked those in leadership positions in the country, “People in leadership, what is your role. That they are responsible for all that is happening. Then, on the side of the people, because they have been so impoverished they take anything from government. When Governors pay salary they clap for him, as if that was with their personal inheritance. This is allocation and money that you collected from the state for executing budgeted and specified services/purposes.”

Corruption, he lamented has greatly eroded and undermined good governance in Nigeria over the years. “It has affected quality and quantity of infrastructure and even emasculated the citizens of their rights and voice.

“Little wonder we have moved from the rank of being the sixth(6th) happiest people in the world to the 155th position because of massive erosion of quality of life of citizens over the years.

“It’s widely acknowledged that over the past five years that corruption has dealt heavy blow on virtually every Nigerian, including the perpetrators. The issue of insecurity was caused by corruption.

“My paper is directed to the duty bearers and those in leadership positions. On the issue of non-accountability of our office holders, Prof … blamed it on the NGOs. I said it that the MMG has a lot of role to play, to ensure that all budget are tracked to get the executors on their toes. Budget tracking is their duty as they were trained specially by even the UNICEF to monitor and track budgets. To ensure the provisions were carried out as stated. I once followed one NGO on protest against the water bill that was coming to the State Assembly. We told them No on that. It now necessitated the Assembly into setting up a Committee that worked on the law and after discovered that the people said they don’t need the water law. So why are we pushing for a water law when the people have said they don’t need it. You as Government never gave the people water. Every citizen gave himself and households water one way or another through borehole or other means, so why are you now interested in putting a low around someone ‘s heritage. This is water you didn’t provide, built, dredge or maintained. So why making a law on it. We saw it as a way of bringing back the RUGA law through the back door.

“Now am invited to the University of Maiduguri as part of the accreditation inspection team, but I sincerely declined because what would I go to do there? WAm afraid for my life. They ugly trend of insecurity is affecting all citizens one way or another”, he pointed out.

Another guest lecturer, Prof Nkechi Ikediugwu who is the Dean Faculty of Education of Nnamdi Azikiwe University blamed Godfatherism, Corruption, Greed and avariciousness as well as get-rich quick syndrome as key factors affecting good governance in the country.

She insisted that the trend must change. That youths should be encouraged into leadership early and be made to adopt positive precept as a way of life.

The National chairman of MMG, Hon Peter Eriobu said the movement was geared towards youth involvement in government and to help eliminate poverty from the citizenry.

That it’s reason they were partnering citizens and corporate organizations to assist, “…as we insist on holding leaders accountable”.