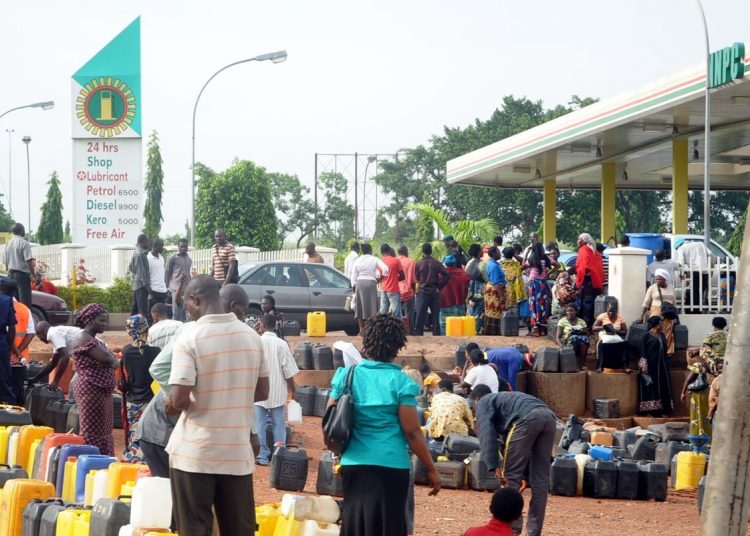 In an effort to calm fray nerves, the NNPC said it was also not aware of any plan by government to cause an increase in the pump price of petroleum.

A statement on Monday by Garba Muhammad, Group General Manager, Group Public Affairs Division, NNPC, in Abuja, said that the NNPC had over 1.7 billion litres of petrol in stock.

According to Muhammad, more of the product is expected to arrive into the country daily over the coming weeks and months.

He said it was therefore unnecessary to entertain any fear of scarcity of petrol throughout the festive season and beyond.

“The NNPC is also not aware of any plan by government to cause an increase in the pump price of petroleum. The Nigerian Midstream and Downstream Petroleum Regulatory Authority (NMDPRA) has made that declaration last week.

“In view of these assurances therefore, the NNPC is advising motorists and other consumers of petrol to maintain their regular pattern of the purchase of petrol without getting into a panic situation that may send the wrong signals around the country,” he said.

According to him, the NNPC is also engaging all stakeholders to ensure smooth supply and distribution of products to every part of the country during the festive season and beyond.

Scarcity of fuel looms in Kano; as many filling stations remain closed

Meanwhile, motorists in Kano State are experiencing fuel scarcity, as long queues have resurfaced at filling stations in the State.

An investigation conducted by NAN Correspondents indicated that majority of the filling stations visited within the metropolitan area were under lock and keys.

The investigation further reveals that only a few filling stations were selling at the control price of N165 per litre.

The situation was, however, characterised by long queues and filling stations selling only with one or two pumps to customers in spite of the long queues.

The situation outside Kano metropolitan area is not different as majority of the stations outside Kano city remained closed while the a few ones operating were selling at above Government-approved price.

In Tsanyawa, Bichi, Dawakin-Tofa and Gwarzo Local Governments, reports indicate that the marketers sell the PMS at N174 per litre which is above the approved price by the government.

A lot of motorists were left with no option than to purchase fuel from black marketers at higher price, ranging from N1,000 to N1,500 per four-litres gallon, depending on the location.

Alhaji Idris Abdullahi, a motorist, said he went round the town to buy fuel on Saturday evening but couldn’t get any and the situation forced him to buy from the black marketers.

According to Abdullahi, he bought a four-litre gallon of fuel at N1,100, against the former price of between N700 and N800.

Malam Muazu Kafar-Na’isa, a driver, also added that he bought four litres of fuel at N1,500 at Tsanyawa on Sunday evening.

He urged the Federal Government to hasten measures that would restore the normal pump price of fuel in order to lessen the burden on the masses.

The Independent Petroleum Marketers Association of Nigeria (IPMAN), Kano branch, had alerted the government over a plan by some private deport owners to increase fuel prices in the country.

Alhaji Bashir Danmallam, IPMAN branch Chairman, Kano state, was quoted as saying in a statement recently in Kano that the decision would cause fuel crises in the country.

He alleged that such private deport owners had already increased the price of the product from N148 to N153 and N155 per litre.

“The association found it necessary to alert the government in order not to blame our members in the event they increase the price of the commodity, as they will not sell at a loss.

“We are equally calling on the management of the Nigerian National Petroleum Corporation (NNPC) to investigate the issue with a view to proffering solutions,” he said.