by Ediri Oyibo
in News, Sports
Reading Time: 4 mins read
A A
0 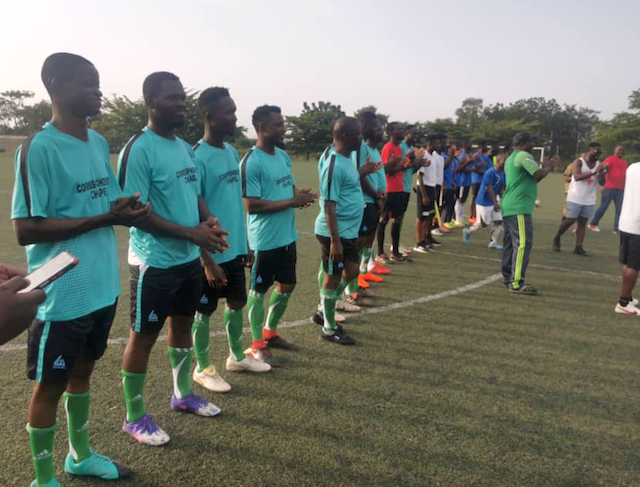 The 2022 Physicians’ Week of the Nigerian Medical Association (NMA), Abuja chapter came to an end on Saturday with a friendly football match between members of the association and the Nigeria Union of Journalists (NUJ), FCT Council, represented by the Correspondents Chapel.

The NMA in the novelty match displayed dominance, inflicting a 5-1 defeat on the Correspondents Chapel of the NUJ FCT Council in the novelty football match played at the FIFA Goal Project pitch, MKO Abiola Stadium.

TheNewsGuru.com (TNG) reports that the NUJ team started the game off on a strong footing until the medical practitioners pulled out a syringe and drew the first pint of blood off the notepadders, scoring the first goal of the game in the 20th minute of play to break the deadlock.

The NUJ team almost responded immediately but a player of the team was brought down in the 18-yard box at the point of scoring with the referee looking the other way. However, the NMA pulled another syringe at the NUJ goalie, who was outstanding all through the encounter, with the game ending 2:0 at halftime.

Again, in the second half, the NMA, whose job of members is to treat malaria, showed the prowess of the Super Eagles, displaying dominance over the NUJ team, who themselves showed some improvements after the break.

However, it was the stethoscope wielders, who scored again in the 50th minute of play to put the game totally out of reach of the journalists. However, the NUJ team did pulled one back. While several penalty calls of the journalists were given a blind eye by the referee, the NMA scored in the dying minutes to end the game 5:1.

Speaking shortly after the encounter, Secretary of the NMA, FCT Chapter, Dr Michael Olarewaju, a Gynaecologist, said members had always involved themselves in various sports, ranging from football, volleyball, and lawn tennis to basketball.

Olarewaju said this had made its members keep fit all the time, adding that the members usually trained every weekend on the pitch used for the match, which made them master the pitch.

On the allegation by the NUJ that NMA played the game using mercenaries, Olarewaju denied it, saying that the players were all doctors.

“I had earlier spoken with the Chairman of the NUJ FCT Correspondents Chapel, Comrade Jide Oyekunle, who represented the NUJ FCT Council Chairman, Comrade Emmanuel Ogbeche.

“I told him that we have different categories of doctors. We only brought some young doctors to play the game. Everyone that played on this field today is a doctor, there are some of them I know personally, some of them are quite young interns.

“Others are not quite young, but let me tell you, we train on this field virtually every weekend and that is number one, number two, our doctors keep fit.

“I personally jog on this axis every day and on Saturdays. I do it for two hours when I’m into it, playing with NUJ is a bragging right for us because we are used to sports.

“At the NMA National game, our team here came second simply because we had a fatigue before the end of that game,” he said.

Olarewaju said that not too long ago, its team thrashed the Nigeria Bar Association (NBA), adding that sport was a regular thing for the association.

Earlier, the NUJ had accused the NMA of fielding mercenaries for the novelty football match, stressing that there was no way the players fielded were medical practitioners, due to their age.

Mr Amadin Uyi, who is the coach of the pen and notepads side, made the allegation and also disclosed that there was undeniable proof that the referee was bribed, revealing that an investigation had commenced over allegations of match-fixing.

“My boys need to hold their heads high for being able to withstand the undue bias by the officiating team. Also, the NMA fielded ineligible mercenaries but we decided to test our mettle and unfortunately the mercenaries overpowered us,” Mr Uyi said.

Meanwhile, speaking with newsmen, Comrade Oyekunle, who played in the match, said that the NMA players were more physically fit compared to the journalists.

“Well, we played the game but they won the match. It was a bone-to-bone encounter and we had a good outing but the Olympic is not to win but just to participate.

“Our team made us proud and they performed excellently. Regrettably, we are a victim of bad officiating as the centre referee did not hide his bias against us which made us lose the match,” Oyekunle said.

He added: “We the journalists are always writing stories, going for one assignment or the other, forgetting to constantly exercise our bodies.

“On a subtle note, journalists need to always take time out of their busy schedules to exercise their bodies, whether they are preparing for sporting activities or not,” he said.

However, Mr Simeon Agada, a player from the NUJ Correspondent Chapel, appreciated  NMA for organising the game, saying it had added more strength to him.

While thanking the NMA for inviting NUJ to play the novelty football match, he said the NUJ team was able to discover its lapses in the game. Agada attributed the huge goals from NMA to lapses on the defensive lineup of NUJ, adding that the defenders could not organise themselves very well.

Agada also blamed the midfielders for the goals, noting that they didn’t coordinate themselves very well.

“We lost a lot of chances, I will want to advise our players to make use of these chances next time we play. Those chances could have been converted to goals if we made use of them.

“Football is a game of chance and once you lose it, your opponent takes advantage of that,” he said.