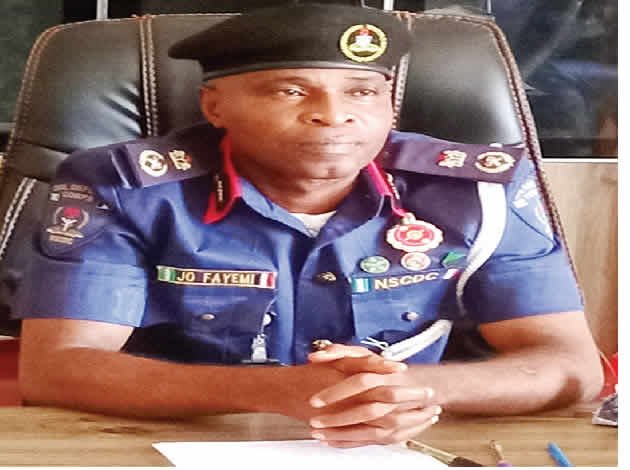 A fake medical doctor, Ayodeji Ademiluyi, 36, has been arrested by operatives of the Nigeria Security and Civil Defence Corps (NSCDC) Ekiti State, FOR defrauding Point-of-Sale operators in the state capital.

The state Commandant of the agency, Mr John Fayemi, said the suspect defrauded the operators by sending fake alerts after collecting cash from them.

He said the suspect used an application on his phone, which also triggered a call from his fake hospital that a patient needed his attention.

The state NSCDC Public Relations Officer, Tolulope Afolabi, in a statement, said the commandant spoke in Ado Ekiti while parading Ademiluyi and another suspected fraudster, Innocent Ekpako, 26, who was arrested in Cross River State for allegedly defrauding his boss.

The commandant, who said Ademiluyi had been perpetrating the act within the Ado Ekiti metropolis, said, “The suspect had defrauded over 25 PoS operators before men of the Counter-Terrorism Unit launched a manhunt for him with their dragnet, which paid off when he was arrested yesterday (Monday). Preliminary investigation shows that he is not a doctor but an okada rider.”

Fayemi said Ekpako, who was arrested in Ikom, Cross River State, ran away with a huge sum of money belonging to his master in Ado Ekiti.

He said, “The suspect is a former employee of a store in Ado Ekiti where he worked as a sales representative before he was sent on an errand with some money which he did not return. He disappeared into thin air until he was tracked, traced and arrested in Cross River State. The two suspects have confessed to the crime.”

The commandant cautioned PoS operators and shop owners in the state to be careful of their workers and customers as the state command had been inundated with complaints bordering on PoS fraud and stealing.

NBC and Fines: Is there still a National Assembly? - By Okoh Aihe