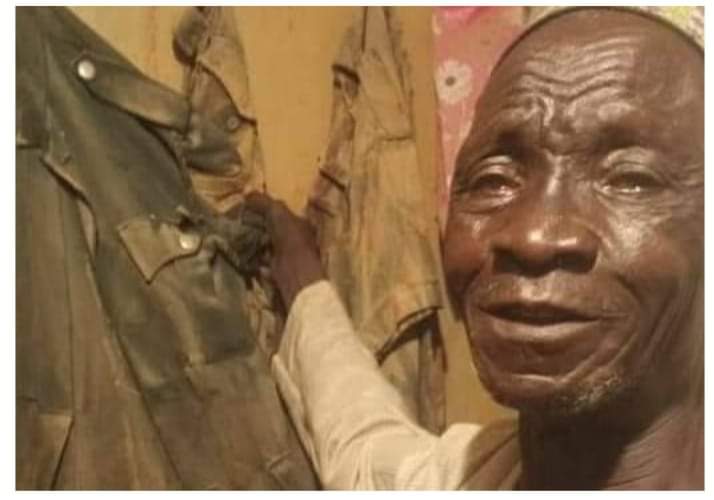 Muhammad Muazu Umaru, a retired octogenarian from the Nigerian Army is going through untold hardship, leading to mental retardation from being denied his retirement benefits 30 years after he left service.

The retiree hails from Wuya-Kede in Mokwa Local Government Area of Niger State.

His story was told to TheNewsGuru by a close family member, Ndatsu Muhammadu.

From all indications, the family is doing everything necessary to ensure they claim what is due the retiree, but bureaucracy is still an impediment.

Muhammad said he had travelled to Lokoja in Kogi State and to Minna TRADOC in Niger State with a view to claiming the retirement benefits to no avail as the demands and processes are ‘deliberately complicated’ by those in charge.

“We were told to bring his employment documents and as far as we understand, these documents are nowhere to be found. We need to get records from Lokoja and Lokoja said they must get letters from Superiors,” said a family member.

Ndatsu told our correspondent that the octogebarian began his military career in 1953 in Zaria, Kaduna State and then retired from the service without any benefits.

He said Mallam Umaru, not wanting to remain idle, joined a local vigilante group in charge of Bida and Mokwa local councils.

Umaru then resign to take up farming.

“He was part of the 127 Battalion Okigbe in Anambra State, where he served under Lt. Col Bitrus of Jos, Lt. Col Abude Wuta from Patigi and Lt. Col. Abbas.”

Umaru who retired as a sergeant officer is now in critical condition. “He hardly feeds and the government has refused to give him his retirement benefits.”

“Let anyone in charge of paying retirees pay him,” he pleaded, adding that their efforts to get Umaru’s entitlement has proven difficult.

“We have also traveled to the pension board in Abuja and they told the family they could not trace his records and as such, there was nothing they could do.”

Efforts by our correspondent to get the military’s official reaction has not been fruitful at the time of filing this report.