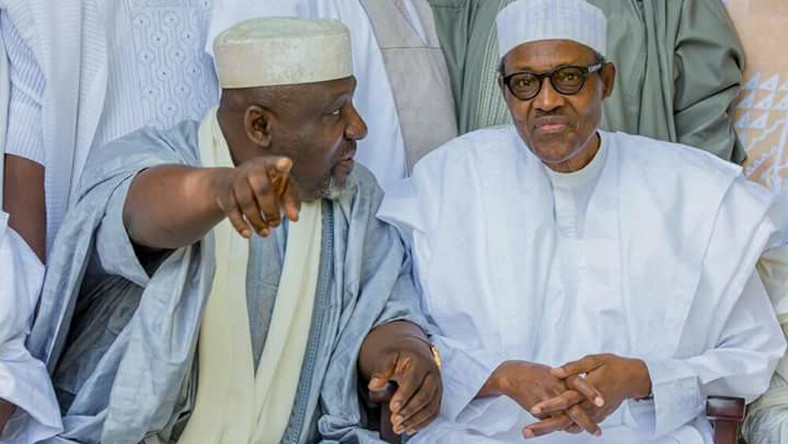 President Muhammadu Buhari has met behind closed door with the former Gov. Rochas Okorocha of Imo at the State House, Abuja.

Speaking to State House correspondents after the meeting, Okorocha said he was in the Villa to seek President Buhari’s intervention over his ordeal with the Economic and Financial Crimes Commission (EFCC).

Okorocha, who allegedly accused the EFCC of “unjust harassment”, claimed that he had secured court judgment and two court orders at different forums, which stop the EFCC from harassing and intimidating him.

Okorocha is being charged by the EFCC with allegations he conspired with others, including an APC politician and five companies, to steal N2.9 billion from public coffers when he was governor of Imo.

However, the former governor, who is currently the senator representing Imo West senatorial district, also accused the people he described as cowards of being behind his ordeal with the EFCC.

Okorocha also told the correspondents that he formally apprised the president on his decision to vie for the 2023 presidential ticket of the All Progressives Congress (APC) in the forthcoming 2023 general elections.

He said: “I also used this opportunity to intimate Mr President of what is going on between me and Economic and Financial Crimes Commission and the harassment and intimidation that I’m getting from the EFCC, literally on daily basis.

”I informed him that I have court judgment and two court orders from different judgments at different forums, which stop the EFCC from harassing and intimidating me. EFCC have refused to obey the law.

“And so I have to inform Mr President that EFCC should be made to obey the law that established it. And without the law there wouldn’t be an EFCC. And the desperation with which they go about any affair that concerning me, should stop.

”The court ordered the EFCC to release my international passport, the EFCC have refused to obey.

”The court gave damages to me for some N500million for EFCC to pay. EFCC has not paid that.

“Rather than doing that, on the day of my declaration, EFCC went on the press to announce that I’m being prosecuted for some criminal charges of N2.9billion and no more N5.9billion.

Asked if reporting the EFCC to the President was to stop the corruption allegation against him, he said that he had not requested the president to stop him from being investigated but to get the anti-graft agency to obey the law.

“I didn’t come here to say, I don’t want to be investigated by the EFCC. That’s not the issue, but that there’s judgment on the ground.”

Bwacha was presented to the president by the Chairman, APC National Caretaker Committee and Governor of Yobe, Mai Mala Buni, at the Presidential Villa, Abuja, on Thursday.

Buni, who spoke to State House correspondents after the presentation, said: ”We just brought in our newest member of the party, the All Progressives Congress, in the person of Sen. Emmanuel Bwacha, for Mr. President to formally receive him into the party, and that is what we have just done.

He said the president was happy and delighted for receiving a ranking Senator like Bwacha joining APC from Taraba.

On his part, Bwacha said: ”I choose the APC because I know from the homefront that is where there will be a level playing ground, number one.

”Then number two, the Ibi Bridge, which had been awarded and work is ongoing, was awarded under President Buhari, nobody from my senatorial district is not happy about this project, because this has been our cry since the colonial days.

”Also, under his watch, the Kashimbila Dam project had been completed. So, I had to answer to the calls of my constituents to join this party and redefine the narrative in Taraba State and restore its lost glory.”

The senator called on citizens of the state to join forces together so that they could build a better Taraba, where governance and development of infrastructure would be seen as the hope of the people and a priority.

Aubameyang reveals his only problem at Arsenal

Aubameyang reveals his only problem at Arsenal