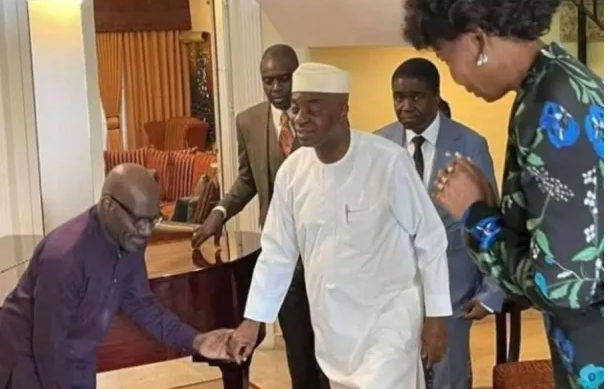 Presiding Bishop of Living Faith Church Worldwide a.k.a Winners chapel,  David Oyedepo on Wednesday paid a condolence visit to the senior pastor of Fountain of Life Church Taiwo Odukoya over the demise of the latter’s wife Nomthi Odukoya.

Oyedepo who was clad in an all-white native attire was accompanied by his wife Faith, his deputy Bishop David Abioye and Pastor Sam Olubiyo.

TheNewsGuru reports that Odukoya’s wife, Pastor Nomthi died on Tuesday after battling with cancer for two years. They were married for 11 years with two sons – Jomiloju and Timilehin Odukoya

Oyedepo is one of Odukoya’s spiritual fathers. He visits the church occasionally and also during their yearly Word Explosion Conference.

President Muhammadu Buhari’s spokesman Femi Adesina in a statement said the president prayed to God for succour and comfort for the cleric and other members of his family.

“The President condoles with the cleric, his church, and Christendom in general over the unfortunate passage, describing it as sad and quite touching.

“He urges Pastor Odukoya to bear the adversity with equanimity, being convinced that nothing could have happened without the knowledge and permission of Almighty God.

“The President prays strength for all who mourn the departed, asking God to give them fortitude to bear the loss,” the statement reads.

In the same vein, Leke Adeboye, the last son of the general overseer of the Redeemed Christian Church of God Pastor Enoch Adeboye; Ifeanyi Adefarasin, wife of the senior pastor of House on the Rock Church Pastor Paul Adefarasin; Nike Adeyemi, wife of the senior pastor of Daystar Christian Centre Sam Adeyemi; former chairman of First Bank of Nigeria Ibukun Awosika among others have also paid glowing tributes to the deceased via social media.