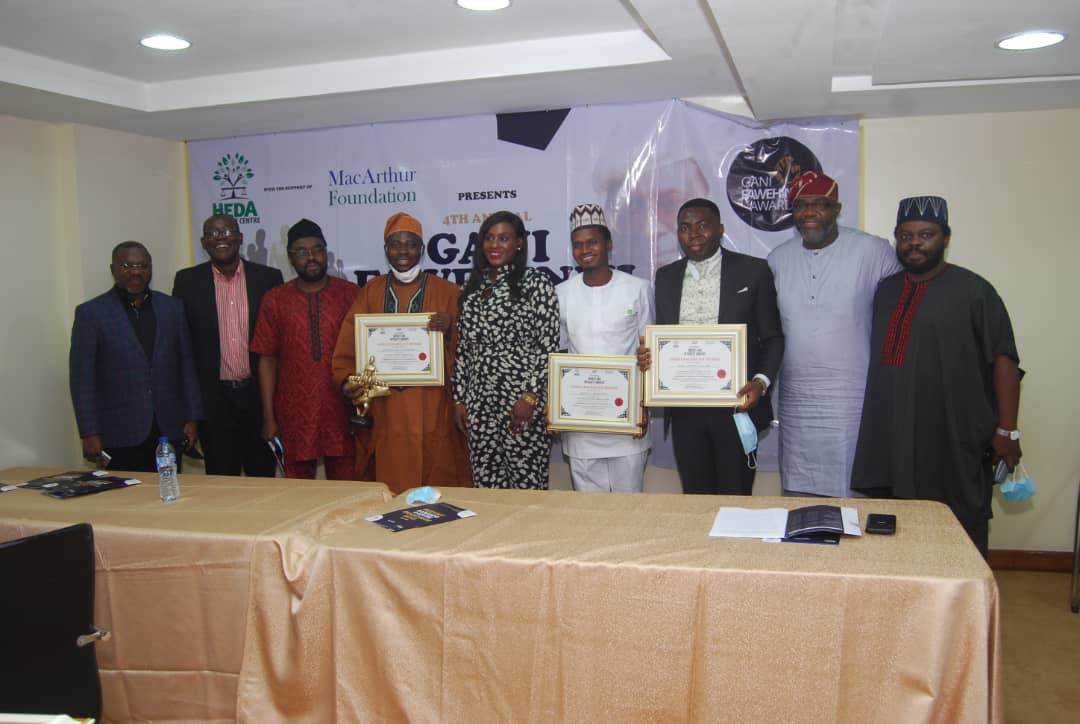 Eminent personalities converge in Ikeja as the 4th edition of the Gani Fawehinmi Impact and Integrity Awards (GFIIA) honoured twelve distinguished personalities across Nigeria and the Diaspora, following a five-month public process of nominations, shortlisting and voting.

In a statement issued by the organiser of the Award, Human and Environmental Development Agenda (HEDA Resource Centre) and signed by its Chairman, Mr Olanrewaju Suraju, the organisation said: “Today is the climax of the 4th edition of the Gani Fawehinmi Awards which started on July 13, 2021 with a public call for nomination following which 271 nomination entries were received; of this number, 21 persons were shortlisted for voting in the four categories of the Awards: six for Outstanding Impact, eight for Outstanding Integrity, four for Valuable Whistle-Blower and three for Nigerians-In-Diaspora Integrity Ambassador.

“Finally, the top three nominees in each category were honoured today as follows: The Outstanding Integrity Award was won by Mr Olasupo Abideen Openyemi, an Alumnus of Harvard Business School, United States of America. The runners up are Dr Tonye Clinton-Jaja, former Chairman of the Governing Board of the Nigerian Copyright Commission and Acting Head, Bills and Legislative Drafting Division of the National Institute for Legislative Studies; as well as Mr Molik Sherifdeen, a member of the Junior Chamber International (JCI).

“The Valuable Whistle-Blower Award was won by Mr Paul Alaba Lawani, a winner of the Global Town Crier Media Award; while the runners up are: Mr Akinyemi Ojo Adebayo, Chair of the Board of Trustee, International Organisation for Human Rights Development and Environment, Nigeria; and Mr Tukur Muazu.

“The Outstanding Impact Award was won by Mr Baba Muhammad Dzukogi, former National Secretary of the Association of Nigerian Authors; while the runners up are Ambassador Chineke Cajethan Goodluck, founder of the United Organisation for Education and Sports Development; and Professor Nwaocha Ogechukwu, a Professor of Religious Studies and 2022 Nominee for Nobel Peace Prize”

HEDA added: “The Nigerians in Diaspora Award was won by Ms Onuike Ifeoma Chinenye, a passionate girls’ rights activist who has also displayed the attributes of distinction when she graduated as the best student and valedictorian in the Girne American University securing a first class degree in law and repeated the same feat in her Master’s degree.”

Other prominent personalities at the Awards ceremony include members of the Board of the Award Comrade Achike Chude, Barrister Nurudeen Ogbara.and Mr kule Adegoke, SAN.

According to Mr Suraju, Chairman of HEDA Resource Centre, “The overall objective of the Awards is to take the fight against corruption beyond the usual naming and shaming, and to step outside the box by ensuring that those who notwithstanding the attractiveness of corruption, bribery and other forms of sharp practices have taken to a life of transparency, honesty and integrity are identified, duly recognized and honoured, as a form of inspiration for greater number of people to follow.” This is why HEDA, with the Support of MacArthur Foundation, launched the GFIIA in 2018 to recognise these forthright individuals, he added.

Tribute to a man of visions and ideas, Prince N.G. Ugen, By By Chris Ewokor and Rufai Oseni

We shouldn’t be trying to convince Pogba to stay – Rangnick

We shouldn't be trying to convince Pogba to stay - Rangnick