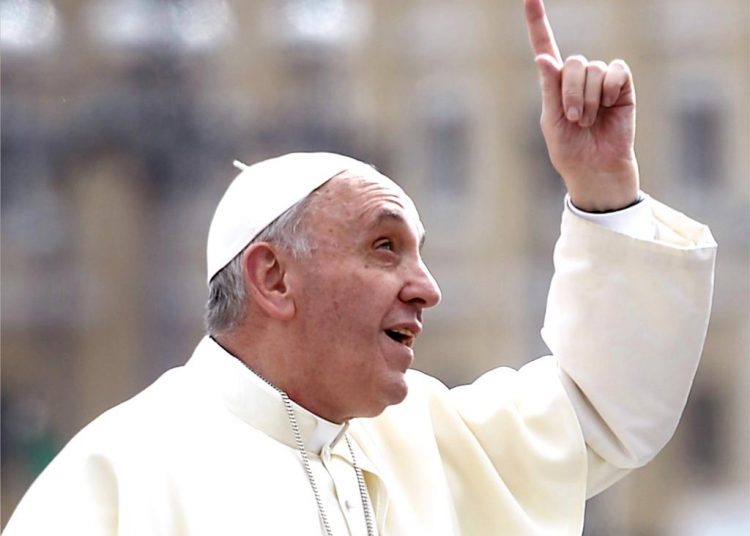 Pope Francis urged the world to “roll up our sleeves” for peace in a New Year’s message Saturday, while calling violence against women an affront to God.

Marking the 55th World Day of Peace, the head of the world’s 1.3 billion Catholics devoted his Angelus address to encouraging a stop to violence around the world, telling the assembled crowd at Saint Peter’s Square to keep peace at the forefront of their thoughts.

“I was looking at the images in the television programme ‘In His Image’ today, about war, displaced people, the miseries. This is happening today in the world. We want peace,” he added, referring to a religious broadcast on Italian state television.

The pope — who turned 85 on December 17 — reminded the faithful that peace required “concrete actions,” such as attention to the most fragile, forgiving others and promoting justice.

“And it needs a positive outlook as well, one that always sees, in the Church as well as in society, not the evil that divides us, but the good that unites us!” he added.

“Getting depressed or complaining is useless. We need to roll up our sleeves to build peace.”

Francis, who in March begins the ninth year of his papacy, called violence against women an insult to God during a mass in honour of the Virgin Mary earlier Saturday in Saint Peter’s Basilica.

“The Church is mother, the Church is woman. And since mothers bestow life and women ‘keep’ the world, let us all make greater efforts to promote mothers and to protect women,” he said.

“How much violence is directed against women! Enough! To hurt a woman is to insult God, who from a woman took on our humanity.”

To mark the World Day of Peace, Francis recommended education, labour and intergenerational dialogue as building blocks for peace.

“Teaching and education are the foundations of a cohesive civil society capable of generating hope, prosperity and progress,” the pope wrote in a message published by the Vatican on December 21, noting that military spending had increased beyond Cold War levels.

“It is high time, then, that governments develop economic policies aimed at inverting the proportion of public funds spent on education and on weaponry,” wrote the pontiff.

The pope, who has spent much of his papacy highlighting economic inequality, the plight of migrants and the environment, returned to those themes following his Angelus prayer Saturday.

“We are still living in uncertain and difficult times due to the pandemic. Many are frightened about the future and burdened by social problems, personal problems, dangers stemming from the ecological crisis, injustices and by global economic imbalances,” said the pope.

“Looking at Mary with her Son in her arms, I think of young mothers and their children fleeing wars and famine or waiting in refugee camps.”

The pointiff read the homily but spent most of the service seated on the sidelines.

The previous year, Francis was unable to celebrate New Year’s masses because of a painful sciatica.

On Friday, the Vatican cancelled the pope’s traditional visit to the Nativity Scene in Saint Peter’s Square over coronavirus concerns.

As elsewhere in Europe, Italy — and by extension the tiny Vatican City State — is facing a surge in coronavirus cases fuelled by the new Omicron variant.