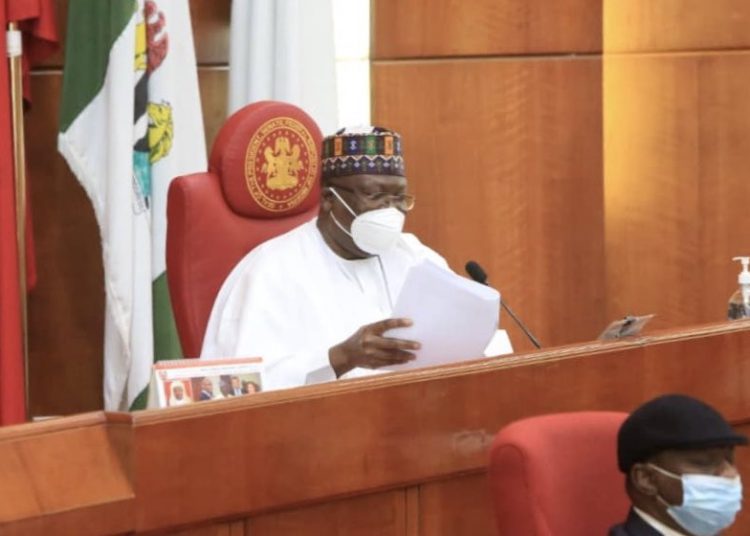 The Presidency has described the refusal by Senate President Ahmad Lawan on Wednesday to entertain the motion to impeach President Muhammadu Buhari as quite appropriate and correct.

The Presidency frowned at the threats by some opposition members of the Senate to begin impeachment proceedings against President Buhari over the nation’s security challenges.

Some Senators from opposition political parties, including the Peoples Democratic Party (PDP) and the All Progressives Grand Alliance (APGA) were reported to have expressed frustration over the nation’s security problems, giving the president a six-week deadline to address the issue or face impeachment proceedings.

However, Malam Garba Shehu, the President’s spokesman, in a statement on Wednesday night described the impeachment attempt as ridiculous.

The statement read in part: ”The performative and babyish antics of those senators staging a walk out notwithstanding, Senate President Ahmad Lawan’s refusal on Wednesday to entertain the ridiculous motion to impeach our President was quite appropriate and correct.

”Rather than making a mockery out of voters by trying to imitate what they see in America, the opposition would be well advised that their time would be better spent tackling the pressing issues Nigerians face, such as the current global cost of living crisis.

”Their continued failure to do so goes some way to explaining why they remain in opposition.

”In contrast, the President Muhammadu Buhari administration is committed to finding lasting solutions to the emerging security threats, including those left behind by the PDP in the South-South, the Northeast and throughout the federation.

”In the last 24 hours, two more Chibok girls were freed, in addition to the three brought home last week.

”These kinds of headline grabbing stunts for which the opposition is now well known serve no one, least of all their constituents.

”We would respectfully remind them that it is those same constituents that they were elected to serve, and are paid to do so with public money.”

The presidential aide, however, expressed the readiness of the All Progressives Congress led administration to partner with all well-meaning citizens including members of the opposition to address the security challenges across the country.

He said: ”We would welcome their collaboration in our efforts to solve the problems Nigerians face on a daily basis. No one is asking them to waste their time attempting to impeach a democratically elected President at the end of his second term – certainly not their constituents.