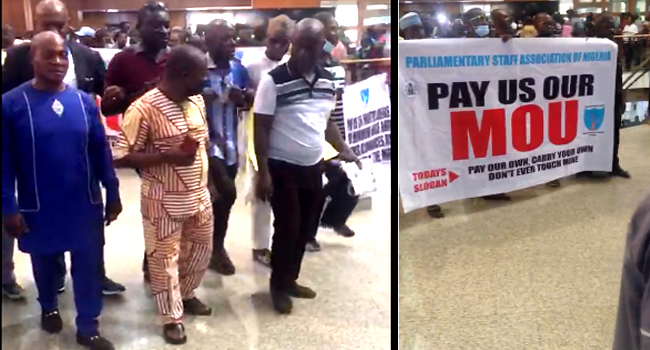 Protest rocks NASS over non-implementation of minimum wage as Clerk to National Assembly, Amos Ojo goes into hiding to avoid the wrath of the protesting parliamentary workers.

The Clerk who was expected to address the protesters on their concerns, but when the protesters who converged in the lobby of the white house waited in vain, only to be told that the Clerk has left.

This further aggravated the situation as the protesters used the opportunity to list the many attrocities of the Ojo-led NASS management.

But a copy of the protest letter dated 6th January, 2022 which was made available to newsmen the association accused the Chairman of the NASC of conniving with the Clerk to the National Assembly to deny the implementation of the minimum despite agreement to that effect.

The resolution which was signed by the Association’s Chairman, Comrade Sunday Sabiyi and the Vice Chairman, Comrade M.A. Liman accused the NASC and NASS of deliberate contempt of their MoU which was agreed on 14th April, 2021 stating that “there would be full implementation of the new National Minimum Wage Act, 2019, and the Revised Condition of Service.”