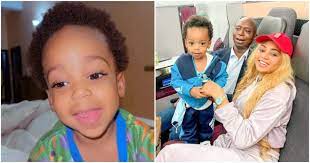 Sharing a video of  Munir displaying for the brand he represents, Regina Daniels said she is delighted to announce her son’s achievement.

SHE WROTE: I AM DELIGHTED TO ANNOUNCE @PRINCEMUNIRNWOKO AS THE LATEST AMBASSADOR/MEMBER OF THE CLASSIC KIDS FAMILY.

HE WROTE: I AM DELIGHTED TO ANNOUNCE THAT I AM THE LATEST AMBASSADOR/MEMBER OF THE CLASSIC KIDS FAMILY.

She welcomed her second child on the 29th of June 2022, the same date as her first son.

Regina Daniels is a Nollywood film actress and a model. She was born in Lagos, Nigeria on October 10, 2000.

Her mother is Rita Daniel, who is also an actress/film producer and the chairman of the Actors Guild of Nigeria (AGN) in Delta State, Nigeria.

Regina grew up in Asaba, Delta State of Nigeria. She has five siblings – three brothers and two sisters. She is the second youngest child in her family. One of her role models growing up was Academy Award-winning actress Angelina Jolie.

Regina Daniels started movie-making at the age of seven; her mother (Rita Daniels) is an actress.

She got support from her mother and her siblings. Her first movie was Marriage of Sorrow which earned her 10,000 Nigerian Naira. Regina was featured in a Nollywood movie titled “Miracle Child” in 2010.

Regina Daniels has been featured in a comedy skit by Ofego on two occasions on his YouTube channel using archive footage.

In January 2019, Regina Daniels was appointed Atiku Abubakar’s Youth Campaign Coordinator. In February 2020, Regina Daniels launched a magazine named after her at a hotel in Abuja.