It has been revealed, President-elect of Kenya, Williams Ruto is father-in-law to a Nigerian Prof of tax law, 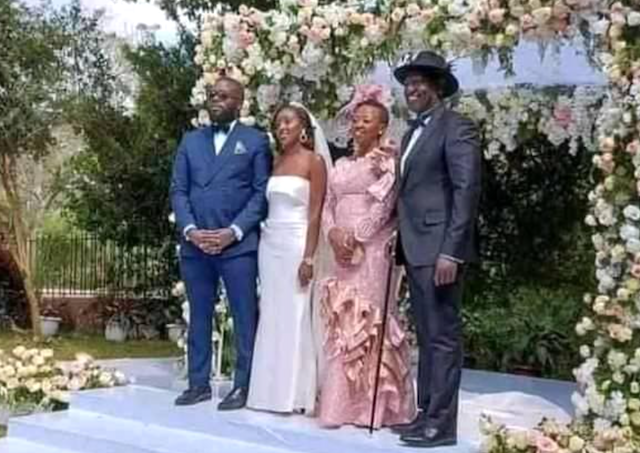 It has been revealed that the president-elect of Kenya, William Ruto is the father-in-law of a Nigerian professor of tax law, Alexander Ezenagu.

The glamourous engagement part saw the merging of two cultures, the Kalenjin community of Kenya and their counterparts from Nigeria – the Igbos

Professor Ezenagu has an impressive professional portfolio having pursued law with an incline to international trade and taxes.

According to his website, Ezenagu is an assistant professor in the College of Law at Hamad Bin Khalifa University (HBKU), Qatar.

​The Nigerian professor graduated from the University of Cambridge in the United Kingdom, where he obtained a master’s degree in Commercial Law.

He holds an LLB from the University of Ibadan, Nigeria, and has been admitted as a Barrister and Solicitor of the Supreme Court of Nigeria.

He has also had multiple publications in academic journals and other globally recognized platforms and has been quoted in the Financial Times, the International Consortium of Investigative Journalists’ Paradise Papers, Tax Notes International, International Tax Review, Quartz and other media outlets.

He has also consulted for the United Nations Conference on Trade and Development (UNCTAD), the Coalition for Dialogue on Africa (CODA)- an African Union Commission body, TaxCoop Canada, the International Bar Association Human Rights Institute (IBAHRI).

Ezenagu supports countries in developing effective fiscal regimes and has worked with governments to introduce fiscal reforms. He is currently designing a course, Developmental Governance, which looks at the influences on the developmental models adopted by developing countries.

At the engagement ceremony, one of the negotiators, Nigerian politician Osita Chidoka, noted that the Kalenjin people of Kenya had so much in common with the Igbos of Nigeria.

June’s father kept the event small and simple and family-focused. His position as Deputy President was relegated as he played the role of a father.

Reports had emerged in 2019 that June was the Kenyan ambassador to Poland. A report quickly denied by her office. At the time, her role, however, was one of the senior-most ranks in foreign service.

Kenya does not have an official embassy in Poland meaning she was Kenya’s highest-ranking diplomat in the European country.

“Congratulations to my father-in-law on your election as the President of the Republic of Kenya. We trust in your ability to deliver your manifesto,” Ezenagu wrote.

NFF to host Annual General Assembly in Lagos on Thursday