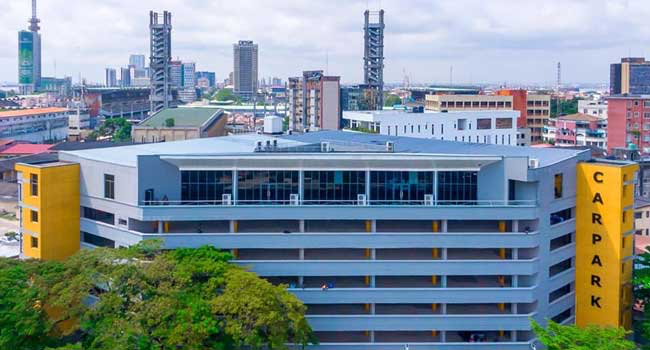 The Chief Press Secretary to the Governor, Gboyega Akosile, disclosed this in a statement issued on Wednesday, noting that the facility was conceived in June 2013 when the incumbent Lagos State Deputy Governor, Dr. Obafemi Hamzat, was Commissioner for Works.

The multi-level car park and facility building consist of five car parking floors with a capacity for 384 vehicles with offices for tickets and restrooms on each floor.

According to the state, the 6th floor is designated as multi-purpose mixed-use consisting of a Club House (410sqm Capacity); two banquet rooms, with a sitting capacity of 800 and 600 persons each; Water treatment Plant, Elevators and staircases for smooth pedestrian movement, and Fire alarm systems, CCTV, data network and power.

Sanwo-Olu said the building will service the renovated Onikan stadium and other primary social centres, such as Island Club, Yoruba Tennis Club, Lagos Lawn Tennis Club, King George V Park, Police Command Recreational Centre as well as other facilities in the neighbourhood and fix parking requirements generated by these centres.

“At the inception of this administration, we promised that our government will work for all, no matter your race, creed or gender. Several months after, we are still committed to this cause and this has necessitated that we expand and extend the reach of infrastructure to fast track growth and development across the state,” the governor said.

“Lagos Island could be modestly referenced as one of the largest commercial corridors in the state. There is, therefore, a corresponding increase in commuting, especially, high volume of vehicular traffic including social activities, culminating in traffic gridlock and pressure along this corridor.”

He also assured that the facility will be supported by efficient traffic management and an Automated Fare Collection Service (AFCS) – that will offer an operable payment solution to prevent traffic dovetailing into the main road.

If your husbands cheat, do the same – Princess Shyngle