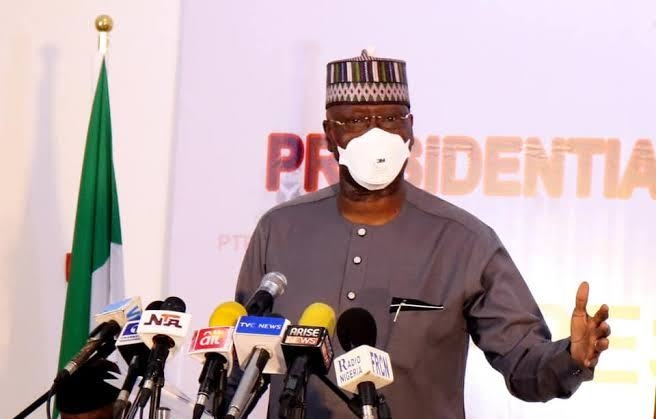 The Secretary to the Government of the Federation (SGF) and chairman of the Presidential Steering Committee (PSC) on COVID-19, Mr Boss Mustapha has clarified misrepresentation in the briefing of the PSC on Monday.

Mustapha on Tuesday in Abuja said it was erroneously reported that the federal government had re-introduced nationwide curfew between 12 a.m. and 4 a.m. as part of the COVID-19 safety protocols.

He, However, said the announcement by the National Incident Manager, Dr. Mukhtar Mohammed, during the PSC press briefing was taken out of context, stressing that the federal government did not relax the curfew imposed earlier under Phase Three of the eased lockdown.

Rather, he explained that what Mohammed said was that the federal government was maintaining the curfew under the Phase Four of the phased restriction of movement.

“Under the Fourth Phase of restriction of movement, night clubs, gyms and others will remain closed till further notice; while all citizens will also ensure that mass gatherings outside work settings do not exceed maximum of 50 people in an enclosed space.

“These restrictions have been in existence under the Third Phase but are being maintained under the Phase Four of the phased restriction of movement,” said the SGF.

He further said because people had been violating the safety protocols, they had forgotten that the protocols were never relaxed in the first place.

“Therefore, the PSC hereby reiterates that there is no newly introduced lockdown. There is no need for the panic that followed the announcement of the Fourth Phase of the phased restriction of movement.

“We will continue to appeal to members of the public to comply with these restrictions because they are necessary safety measures against contracting the dreaded coronavirus, which is still ravaging human populations across the world,” Mustapha said, while speaking with NAN.

Recall President Muhammadu Buhari had approved the transition of the Presidential Task Force (PTF) on COVID-19 to PSC on COVID-19, which took effective from April 1, with a modified mandate to reflect the non-emergent status of COVID-19 as a potentially long-term pandemic.

“The structure of the PSC shall reflect the new focus of the response with a targeted approach on vaccine oversight, risk communication, international travel quarantine processes and sub-national engagement; and that the tenure of the PSC shall last till 31 December, 2021,” said the president.

He added that the PSC would maintain the present constitution, functions and strategies of the PTF; be supported by a slim technical and administrative structure.

Mohammed is expected to formally take over from the National Coordinator, Dr. Sani Aliyu, and function as the Head (Technical Secretariat) and member of the PSC.

In a similar vein, Minister of Information and Culture, Alhaji Lai Mohammed denied that the federal government has “introduced or re-introduced’’ new restrictions on COVID-19.

The Minister made the rebuttal at a meeting with Online Publishers in Lagos State.

Mohammed said there were no new restrictions, adding that the Presidential Steering Committee on Covid-19 only reiterated existing regulations to control spread of the disease.

The minister, a member of the steering committee, said the committee’s national incident manager Mukhtar Mohammed was quoted out of context during the briefing of the committee on Monday in Abuja.

He said the only thing that was newly introduced was that anyone, including Nigerians travelling from Brazil, Turkey or India, must go through compulsory quarantine.

“What we did was the need to remind people of the existing extant regulations on Covid-19.

“Government has not introduced anything new. You can still travel by air or road or any other means but ensure you wear your face mask.

“We have not opened night clubs, the regulations on social distancing, social and religious gatherings, use of face mask are still in place.

“The curfew between 12 a.m. and 4 a.m. is still on and we are saying people must obey the existing protocols,’’ he said.

The minister said the emphasis became imperative because Nigerians were taking things for granted and behaving as if COVID-19 had gone.

“This is the mistake that India made when they actually boasted they had conquered Covid-19.

“They were holding political campaigns and religious festivals when a new variant of COVID -19 surfaced.

“This is why every citizen must know where we are going,’’ he said.

Mohammed said Nigeria had been fortunate not to record high rate of infection that it would not have the health infrastructure to handle.