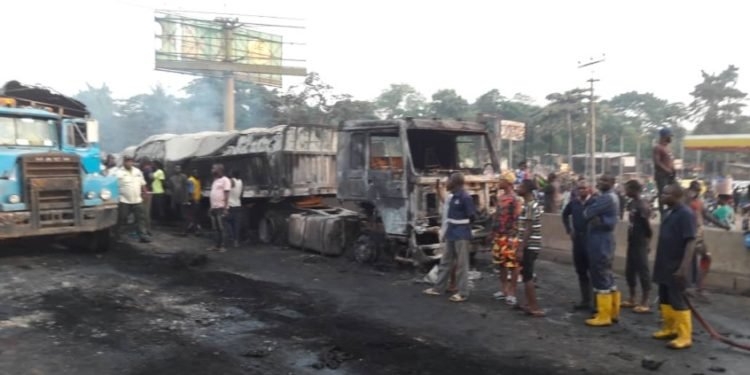 Six persons were on Friday burnt to death in an accident that occurred at Ode Aye junction in Okitipupa Local Government Area.

According to reports, the accident took place when a coaster bus and a J5 bus laden with substance suspected to be Ethanol collided.

Witnesses said one of the vehicles attempted to overtake the other before the collision, which caused a spark that engulfed both vehicles.

One dies, another injured in accident involving LAGBUS

Passengers in the coastal bus belonging to Akure North Local Government Area were on their way to Okitipupa to attend a social function of one of the Directors of Odigbo Local government area.

It was gathered that other victims that were seriously injured were rushed to the Prima hospital in Ore, Odigbo local government.

Eyewitnesses said residents in the area tried to put off the fire but could not because of the ethanol loaded in the J5 vehicle.

They said all the six persons were burnt beyond recognition.

The remains of the victims have been deposited at a hospital in Ore.

I didn’t do my research before moving to England – Okocha