As part of the backlash from Amnesty International’s recently published fallacious report about Nigeria, some concerned indigenous groups have continued to show solidarity with the Nigerian Army.

At a time a bulk of the country’s so-called non-governmental organisations have formed an alliance with the UK-based organisation, the Save Humanity Advocacy Centre (SHAC) has remained resolute, describing their contemporaries as “enemy of Nigeria.”

Instead of condemn the malicious report, several local groups and NGOs jumped in support of the A.I just for their selfish interests.

In a statement released on Thursday, through Adams Odoh, Executive Director, the SHAC questioned these groups and their motive despite Amnesty International’s apparent dangerous intentions.

I wanted Man Utd exit after one training session — Sanchez

The SHAC, however, advised these local groups to desist from colluding with Amnesty International and other affiliates in the name of foreign grants that are actually meant to promote neo-colonial agenda in the country.

“The Save Humanity Advocacy Centre (SHAC) has noted with some measure of disappointment the manner some indigenous NGOs lend themselves to imperialists. The specific incident referenced is the eagerness with which some NGOs rushed to be the first to endorse the puke inducing report published by Amnesty International. This is even after the report, “Harvest of Death Three Years of Bloody Clashes between Farmers and Herders in Nigeria,” has been dismissed as a cross between the documentation of fertile hallucination and high fantasy fiction, “ Mr Odoh began.

“Without prejudice to the condemnation of the report by experts, SHAC is of the opinion that the report would have naturally been consigned to the dustbin of history but for the overzealousness of some these indigenous NGOs that practically parroted its content, rehash it and elevated it to the level of canon. It is a shame because it speaks to the deficit in self confidence that has left the country at the mercy of the whims and caprices of people that attempt to decide the fate of Nigerians from the plush lobbies of conferences and gala events in faraway lands.

“Some persons with knowledge of Amnesty International’s strategy in other countries will tell their collaborators in Nigeria the truth, and they will do so for free. The whole friendliness and invites to estacode paying conferences will dry up once this criminal organization is allowed to destroy the country; none of the prospective proposals used for recruiting the local NGOs for its infamous cause will translate into visas or resident permits when the blowback of Amnesty International’s dangerous agenda hits us all.

“We want to make it categorically clear that only the enemies of Nigeria collaborate with Amnesty international. So anyone that partners with Amnesty International towards the realization of its destructive goals in Nigeria is an enemy of the country and must be treated as one. They would be named and shamed as those abusing the sacredness of NGO work to promote terrorism, which implies that like Amnesty International, they have blood on their hands.

“In a similar vein, we urge all self-respecting NGOs to begin drafting contingent plans for isolating Amnesty International from their folds. This will include turning down invitations to events organized by or being attended by Amnesty International, declining comments or inputs in documents being complied by the international NGO, not extending invitations to the NGO and flagging cases of falsification and lies told by the organization.

“For the Nigerians representing Amnesty International against the safety of humanity. Our fervent hope is that they have reconciled with their inner self for when the evil they are executing for their organization echoes back on their lives. That is the time they will know the anguish that their colleagues experienced in other countries to the point of committing without Amnesty International as their employer battling an eyelid or raising a finger even when the hints that haunted the deceased were done at its behest.

I wanted Man Utd exit after one training session — Sanchez 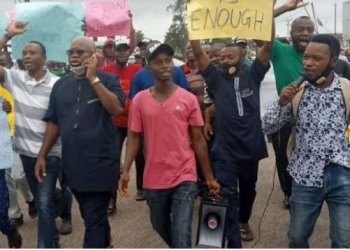