by Ediri Oyibo
in News
Reading Time: 2 mins read
A A
1 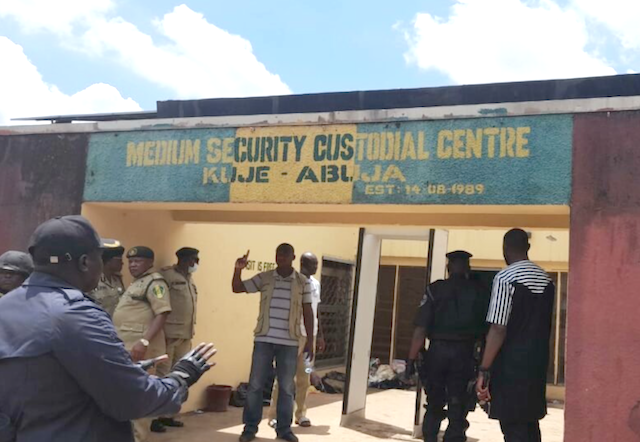 Two of the 15 suspected invaders of the residence of Justice Mary Odili (rtd.) were among inmates who absconded from the Kuje Correctional Centre during the July jailbreak.

Recall gunmen had on July 5 attacked the Kuje Prison facility and freed hundreds of inmates, including suspected Boko Haram members.

Usman Jibrin, counsel to the 6th, 13th and 14th defendants disclosed this before Justice Nkeonye Maha in the last adjourned date.

At the resumed hearing on July 19, Aliyu Umar Ibrahim, Shehu Jibo and Abdullahi Adamu who are 6th, 13th and 14th defendants respectively in a suit filed by the police against the 15 suspects, were not in court.

Jibrin informed the court that the three were victims of the jailbreak, and Justice Maha ordered the prosecution to investigate the matter and report back on Nov. 16.

When the matter was called on Wednesday, prosecution lawyer, Mathew Omosun, reminded that when the case came up on July 19, the court made an order and his office wrote to the prison authorities concerning the three defendants.

While reading the response of the prison authorities in the open court, Omosun said the correctional service said only Jibo and Adamu (13th and 14th defendants) were at large.

But Jibrin, who also appeared for Ibrahim (6th defendant), expressed concern that his client was nit in court despite the response of the correction service that he was not at large.

He prayed the court to order the prison authorities to produce Ibrahim in the next adjourned date.

Omosun, however, applied that the three defendants could be tried in absentia in accordance with Section 521 of the Administration of Criminal Justice Act (ACJA), 2015.

The judge then asked the prosecution if the Inspector-General of Police, Usman Baba, had been informed about the development and if a team of detectives had been set up to get them rearrested.

Justice Maha, who adjourned the matter until Feb.16 for trial continuation, ordered the Nigeria Correctional Service (NCoS) to produce Ibrahim (6th defendant) in court in the next adjourned date.

Odili’s home at No 7, Imo River Road, was, on Oct. 29, 2021, invaded by some persons who claimed to be security agents on allegations that the judge was keeping a large sum of money in foreign currencies.

On Dec. 15, 2021, the 15 suspects arrested over the invasion were arraigned by the police before Justice Maha.

They were arraigned on an 18-count charge in suit no. FHC/ABJ/CR/436/2021 which bordered on alleged conspiracy to commit felony and forgery of court documents.

They include two lawyers (Alex Onyekuru and Igwe Ernest); a serving policeman (ASP Mohammed Yahaya and Hajia Maimuna Maishanu), the only woman.

On Jan. 17 a prosecution witness, ASP Madaki Chidawa, who is attached to retired Justice Odili’s home, testified how the invasion was foiled.

Chidawa, who said he had been a policeman for the past 29 years, 15 of which he had spent with the judge, said he knew the defendants when they came to the residence on Oct. 29, 2021, claiming to possess a warrant to search the house.

On May 12 that Justice Odili, the Supreme Court justice, retired from active judicial service after clocking 70 years mandatory retirement age.