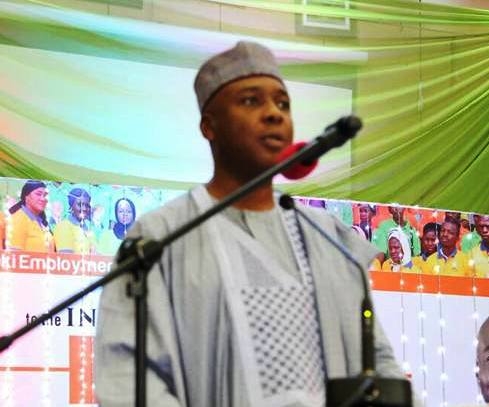 Former President of the Senate, Dr. Abubakar Bukola Saraki, has called on government and other stakeholders to take the fight against drug abuse to our various borders in order to cut off supply of illicit drugs into the country.

Represented by Dr. Ali Ahmad, former Speaker of the Kwara State House of Assembly at the 7th Annual General Meeting (AGM) of the Northern Broadcasting Media Owners Association in Kano on Monday, Saraki, who spearheaded the 8th Senate’s 2017 Roundtable on the ‘Drug Use Crisis in Nigeria,’ stated that the country must adopt tougher measure to discourage those who want to turn the country into a drug hub in West Africa.

“The government simply has to get a handle on the problem of ‘supply reduction’ as the National Drug Law Enforcement Agency (NDLEA) calls it. This must first and foremost start with our porous borders. Since our drug problem and our insecurity problem are indeed interlinked and we certainly do not want to become the drugs hub of West Africa, combating drug abuse and drug trafficking in the North must go hand in hand with combating banditry. Without customers, no bandit-dealers, with no dealers, no customers,” the former Governor of Kwara State said.

Saraki also called for stricter enforcement of NAFDAC regulations, to enforce the use of prescriptions for certain classes of drugs, while also calling on the media to play a central role in sensitising the public about the dangers of drug abuse.

He emphasised that with 14.4 percent of Nigerians between the ages of 15 and 64 on drugs, it is important that leaders across the nation develop the necessary political will to adopt sustainable solutions to combat the drug use crisis.

He said: “Today, possibly triggered by the legislative work done by Eighth Senate, when, as some of you may remember, on December 18, 2017, we convened a roundtable dialogue on the Drug Use Crisis in Nigeria, here in Kano, some pharmaceutical companies have been closed to stop illicit production, but the problem persists.

“To be frank, the media can play a major role. You can support, if not drive, both ‘supply’ and ‘demand’ reduction. I believe the following three areas are all-natural fits:

“First, you can play a strong role in awareness-building. Who is better suited than the media to describe the epidemic as just that, and do not let it drop out of the headlines? Likewise, I would imagine this could be supported in particular by highlighting the human interest side. This would ultimately dovetail with campaigns advocating for our state governors to assist in providing more treatment facilities, outreach, and public education. Today, most government health facilities are not staffed and equipped for treatment and care for people with drug use disorders.

Second, the media is ideally placed to “name and shame”. To provide investigative reporting on drug/pharmaceutical production and sales. Where NAFDAC rules cannot be enforced, for whatever reasons, the media can make a difference. Where things get sold not over the counter but under the counter, their cameras can be pointed. Would the big stories we read about and view or hear about have entered the public space without the emphasis you in the media placed on it? NO. Your reports, incidentally, also indirectly help legislators and law enforcement agencies in their efforts to step indecisively.

“Third, you could champion an Anti-Drugs Crusade. For example, by ‘de-glamourizing’ those video clips where showbiz kids get stoked up on whatever substances. By linking such activities to the downside of drug abuse. At the same time, you could, and rightly, glamorize the actions of NDLEA, NAFDAC, border patrols – because those are the heroes protecting us,” Dr. Saraki said.

Why we prioritise infrastructure development - Buhari