The world is in need more than ever before – Tony Elumelu 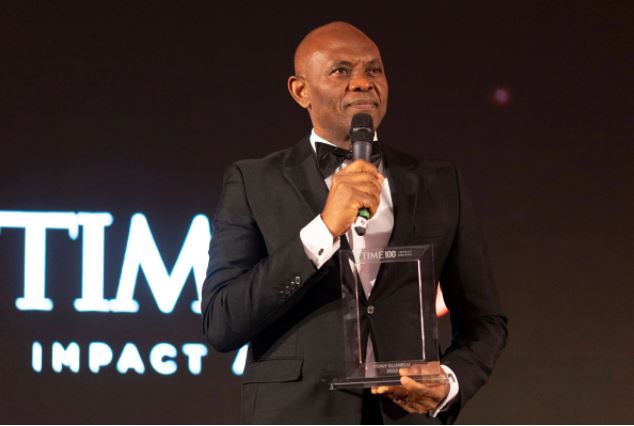 As the Chairman of United Bank for Africa Plc, and Tony Elumelu Foundation, Mr. Tony Elumelu, yesterday, accepted the TIME 100 Impact Award at the Museum of the Future in Dubai, United Arab Emirates, he said that “The world is in need of people like him more than ever before.”

Elumelu, who took the stage at Monday night’s TIME100 Impact Awards and Gala, spoke with a sense of urgency.

According to him, “The world is in need of people like us—more than ever before,” he said to the crowd, which included celebrities, politicians and prominent business leaders. “We should pull resources together, we should commit now to help in anyway possible in economically empowering others,” he added.

Elumelu’s plea is part of the reason he was on the stage at the Museum of the Future in Dubai in the first place. The TIME100 Impact Award recipient has spent his career advocating for economic empowerment in the less fortunate places in the world.

The Nigerian entrepreneur paid tribute to the “hard-working young men and women in Africa who aspire to help their families and their communities.”

He shared his story of rising from a modest beginning to launching the Tony Elumelu Foundation in 2010, which is aimed at creating “significant opportunities and economic hope for others” while “helping redefine how all of us need to work together to uplift through the message of entrepreneurship.”

The foundation has given $5,000 each to 15,000 young entrepreneurs from 54 African countries as part of his effort to grow the entrepreneurial spirit in Africa and encourage economic development.

In addition to his philanthropic efforts, Elumelu serves as chair of the United Bank of Africa, where his vision for securing long-term investments from the private sector to drive economic development in Africa has helped create new job opportunities and turn the continent into a hub for

innovation. And Monday night, Elumelu stressed that Africa, and the world, need investment and opportunities more than ever.

“In the 21st century, there’s so much poverty, sickness, and bitterness in the world,” he said. “Our calling should be one that has to prioritize humanity.”

PRESIDENTIAL SEAT: President Buhari to know fate on May 27