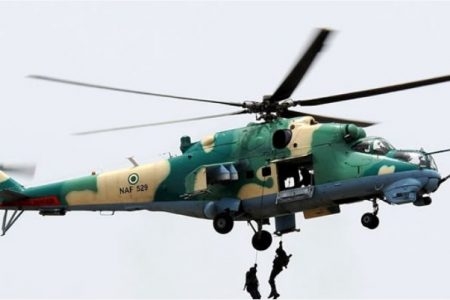 U.S. Congress has put on hold a proposal to sell almost $1 billion weapons to Nigeria over human rights abuses by the Buhari government.

Reuters, which reported the Obama era-like arms embargo, relied on three sources, said to be familiar with the matter.

The proposed sale of 12 AH-1 Cobra attack helicopters made by Bell and related equipment worth $875 million is being delayed in the Senate Foreign Relations Committee and in the House Foreign Affairs Committee, the sources told Reuters on condition of anonymity.

Foreign Policy reported earlier this week that the State Department had informally notified Congress of the proposed sale but it was frozen in the Senate committee.

Under normal practice, the State Department tells Congress of proposed arms sales informally in advance to give lawmakers the chance to put a hold on the proposals to raise concerns.

If Congress opposes the sale after a formal notification, it can pass legislation to block it.

A State Department spokesperson said: “As matter of policy, we will not confirm or comment on proposed defense sales until they have been formally notified to Congress.”

The Senate and House Committees both declined to comment on the issue.

The sale that has been put on hold could have an impact on Nigeria’s efforts to seek support to fight Islamic State-allied group Boko Haram in the northeast and armed bandits in the northwest of the country.

Nigeria is also battling rising armed robberies and kidnappings for ransom where thinly deployed security forces have struggled to contain the influence of armed gangs.

Thousands of Nigerians protested nationwide for nearly two weeks last October, demanding an end to a police unit called the Special Anti-Robbery Squad (SARS), which they said was responsible for extortion and human rights abuses.

The police disbanded SARS, but denied most accusations.

In a recent session at the House of Representatives, there were testimonies against Buhari government over attacks and killings of Christians in the country.

The abuse of human rights by the military also continues in eastern Nigeria where scores of IPOB elements have been killed extra-judicially.

On July 1, DSS officials stormed the Ibadan home of Sunday Igboho, Yoruba nation agitator, killed two aides, destroyed furnishings in the house and many cars parked in the compound.

The Buhari government has also attracted criticism for the way its security operatives organised the kidnapping in Kenya of Nnamdi Kanu, leader of the Indigenous People of Biafra.

He was then flown to Nigeria, in violation of international law.