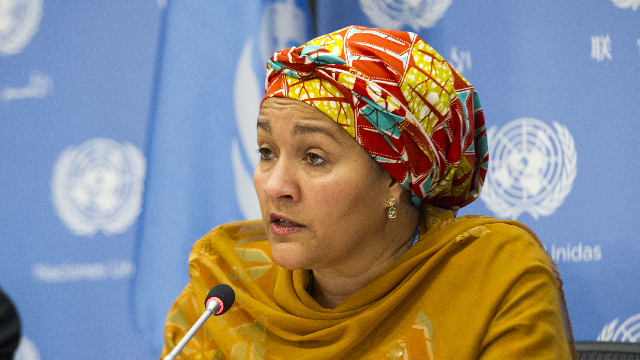 The United Nations Deputy Secretary-General, Amina Mohammed, has travelled to Nigeria to attend the 2022 Annual Conference of the Institute of Directors.

Farhan Haq, Deputy Spokesperson for the Secretary-General said this at a news conference at the UN headquarters, New York, on Wednesday.

Haq said Mohammed would also undertake a series of meetings on the UN’s partnership with Nigeria and ways to accelerate the implementation of the Sustainable Development Goals (SDGs).

“Mohammed will have meetings with a wide range of partners, including senior Government officials, the UN country team and youth representatives,’’ he said.

According to him, the deputy secretary-general will take a short leave after her engagement in Nigeria before returning to New York on December 8.

In a related development, Haq said the UN team in Chad, led by Resident and Humanitarian Coordinator, Violette Kakyomya, was working closely with national authorities and partners to respond to unprecedented levels of flooding.

“More than 100,000 people are in displacement camps, in urgent need of shelter, food and health care,’’ he said.

The deputy spokesperson said while authorities had been leading the response and mobilising national resources, the UN team had mobilised further resources, including $9 million dollars from the UN’s Central Emergency Relief Fund (CERF).

He said the World Food Programme (WFP) had so far provided food assistance to nearly 240,000 people.

“For their part, the UN’s Refugee Agency (UNHCR) and the International Organisation for Migration (IOM) have provided shelter for 20,000 people.

According to him, a total of 70,000 people, including 31,000 children in displaced camps, have access to lifesaving medicine and mosquito nets.

“More than 25 Temporary Learning Spaces and educational kits have also been offered to flood-affected children by UNICEF and United Nations Educational, Scientific and Cultural Organisation.

“The UN Development Programme (UNDP) and the Food and Agriculture Organisation (FAO) are focusing on a swift and resilient recovery.’’