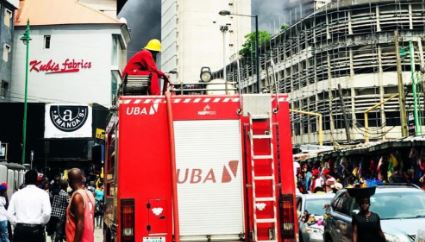 The fire fighters of the United Bank for Africa, UBA with the combined efforts of the Lagos State Fire Service and other rescue agencies have helped put out the fire at Oando Filling Station in Obalende, Lagos, TheNewsGuru.com (TNG) can authoritatively report.

TNG reports that the filling station is opposite the Obalende BRT shelter.

According to reports, the fire started at 3.30 pm when a tanker about to discharge fuel at the station fell and caught fire. The fire engulfed the station and was almost extending to adjoining buildings.

However, the timely arrival of the UBA fire team coupled with those of the Lagos State Fire Service and other rescue operators who had been battling the fire earlier helped put out the inferno with little or no casualties.

Recall that the bank in 2010 acquired a state-of-the-art fire fighting truck, capable of fighting fire incidents in all conditions. The vehicle, acquired by the bank, among other advanced fire fighting machines, is in further demonstration of its commitment to ensuring a safe and conducive working environment at all times.

TNG reports that the UBA Fire Service has in recent past intervened with its world class equipment to put off fires in Balogun market, Transcorp Office and many others.

See video from the rescue scene below: 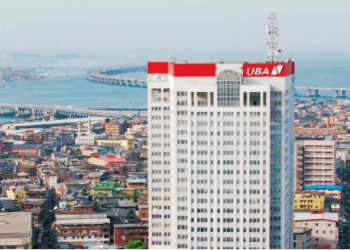