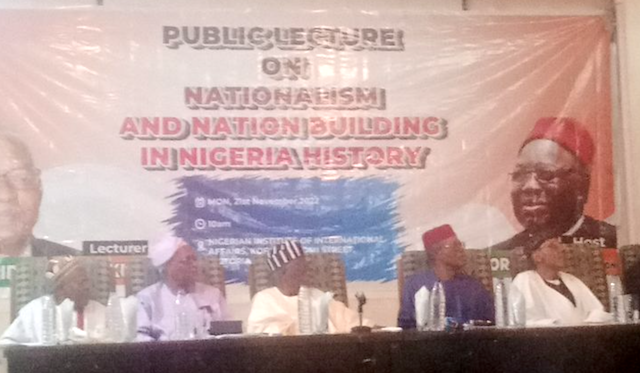 The professor Emeritus of Geography at the University of Ibadan, and renowned social scientist of global recognition, said such leaders should be able to proffer solutions to the economic, social and political problems affecting the country.

Osuntokun, an Ekiti- born professor, made this known at a Public Lecture on “Nationalism and Nation Building in Nigerian History” in Lagos on Monday.

The lecture with the topic : the Genesis of Nigerian Nationalism, was hosted by Prof. George Obiozor, President General of Ohaneze Ndigbo.

Osuntokun recalled that the late Nelson Mandela had said that until Nigeria became very  successful, no one would have respect for the black man.

The octogenarian said it was regrettable that Nigeria’s  external force challenges,  worked against the success of the country.

He regretted that some Nigerian  leaders appeared oblivious to the destiny of the country and the black race.

Osuntokun said Nigeria democracy should be based on the French revolution credo of careers open to talents instead of the current nebulous federal character.

He said that the future of the country was already pregnant and no one, with mathematical precision could hazard what it would bear.

The octogenarian said that as a former ambassador of Nigeria, he was in favour of finding solution to the constitutional and structural problems in the country.

He said: “I saw how our size, resources and population brought us respect abroad.

“The sorrowful thing is that some of those at the commanding height of political leadership in this country appear totally indifferent to the destiny of Nigeria and the black race.

“What we need if this country is to succeed,  is to find collective and equitable solutions to the way we choose our government.

“The electorate should elect government that is based on the French  revolution credo of careers open to  talents.

“This is instead of the current nebulous federal character and the odious and rampant corruption running the country while the majority of our people vegetate in poverty and in want.”

Osuntokun recalled that during the Gen. Ibrahim Babaginda regime, he inaugurated committees including himself and others from various universities from the North and South of the country,  to design a formula in solving what was called the ‘National Question’.

He said they worked under the ministry of special duties in the presidency with absolute freedom to come up with  recommendations.

Osuntokun said they came up with a recommendation of collective presidency and they suggested dividing the country into six zones namely,  South-South, South-West, South-East, North-East, North-Central and North-West.

“We suggested that if any president comes from these zones, the remaining five zones will produce five Vice Presidents,  each of them heading the ministry of Finance, Defence, Interior, Foreign Affairs and Education.

“We also suggested that the presidency will be rotated every five years so each zone will have the chance to head the country and no zone will he kept out of power for too long.

“We recommended that political parties will contest for power on this basis and whoever wins must locate people representing all the six zones within their parties.

“This was submitted, I believed in 1987, years before the 1993 election  which Abiola won and some members of the PDP later claimed zoning was their contribution to political engineering in the country.”

According to him, this is not true, the verdict on the way to run the country is still hanging in the air.

The nationalist said they did not have too much time to find an appropriate constitutional architecture with which Nigeria could build a happy state acceptable to all their people.

Osuntokun said since 1966, Nigeria had struggled to find a modus operandi of ruling a multinational state, balancing regional desire for autonomy under the overarching national structure.

He noted that the search of a modus vivendi unfortunately,  led to the disastrous civil war in which some millions of Nigerians died from 1967 to 1970.

The don said one would have taught Nigeria had learnt a bitter lesson from its recent history but the contrary was the case.

The Octogenarian said several unviable states by the whims and fiat of the military rulers  who had dominated the politics of Nigeria for years,  had  been created,  thus miniaturizing the power of the constituent states.

He said from the demand for restructuring by almost everyone, it seemed those in power had better listened and controlled events from above rather than leaving the people to demand by force of numbers from below.

Earlier, In his opening remarks, Prof. George Obiozor, President General of Ohaneze Ndigbo, said for Nigeria’s unity to succeed,   leaders needed to emulate the experiences of countries that did not ignore the element of pluralism in their respective countries and societies.

Obiozor said recently, some Nigerian political leaders said the nation’s unity ‘is non-negotiable’ but noted that it  was an irony because these leaders had failed to learn the lessons of history in general.

According to him, Nigerian unity is definitely negotiable and must be re-negotiated for it to stand the test of time.

“Nigeria needs a system of shared power, bearing in mind that political decency flourishes best in societies in which stable, peaceful and just political institutions make it difficult for reckless and lawless political adventurers to thrive.

“Also, throughout history, those denied justice have had no interest in peace, people need peace and not peace of the graveyard, people need unity but not unity of masters and slaves.

” Our national unity must not interfere seriously with our freedom and liberty or it will be interpreted as tyranny of the majority or minority, none of which will be acceptable,” he said.

Speaking, the Chairman of the lecture, Gen. Atom Kpera noted that from independence till date, no generation of Nigerian leaders had been able to create an atmosphere of credibility.

This he said,  would have ensured Nigeria claim to a political future as one nation.