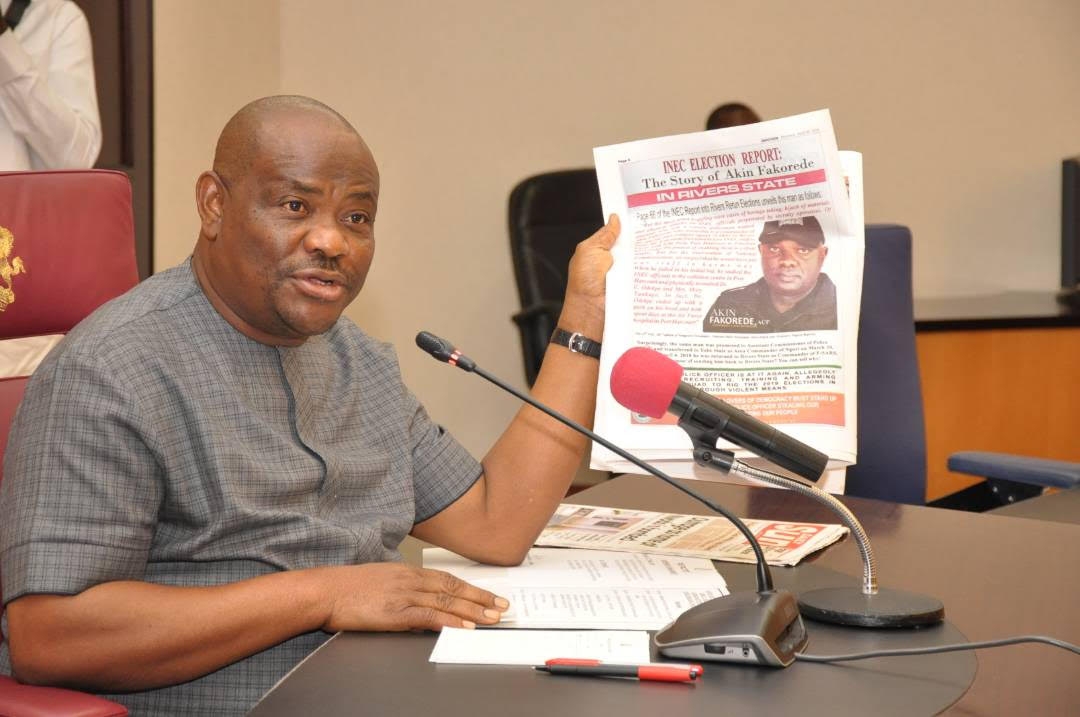 The police command in Rivers has denied the report that its personnel prevented the destruction of an illegal oil bunkering site in the state.

The command’s Acting Spokesman, DSP Grace Iringe-Koko, said in a statement in Port Harcourt on Wednesday that policemen who visited the illegal refining site for operation were resisted.

Iringe-Koko said that it was untrue that policemen prevented the Chairman of Obio/Akpor Local Government Council from demolishing the refining site located at Ogbogoro community.

She described the report as carried by a national newspaper as grossly misleading and untrue.

According to her, the council chairman, Mr George Ariolu, actually visited the site with a detachment of policemen led by ACP Akika Solomon.

She explained further that the chairman’s team was confronted and resisted by no fewer than 20 armed personnel of the Nigeria Security and Civil Defence Corps (NSCDC).

”The NSCDC personnel were violently opposed to the inspection of the depot. In the ensuing altercation, two NSCDC officials corked their rifles against the police.

”They were eventually disarmed and arrested by the police before Ariolu had access into the depot,” she stated.

Iringi-Koko urged members of the public to disregard the report and appealed to journalists to thoroughly verify their facts before publication.

”We are fully committed to fighting the war against illegal oil bunkering to a logical conclusion,” she said.

In his reaction, Mr Bature Aliyu, NSCDC Commandant in Rivers, dismissed claims that the site was used for illegal oil activities.

”The marine exhibit yard in Ogbogoro jetty is not an illegal bunkering site.

”It is a holding bay used by NSCDC to detain boats, vessels, barges and drums used for illegal oil bunkering,” he said.

Aliyu, who spoke through the command’s Assistant Commandant of Corps, Michael Oguntuase, said that NSCDC’s Commandant-General, Ahmed Audi, visited and endorsed the site in 2021.

”So, the yard is NSCDC’s marine exhibits yard and not an illegal dump.

”Most of the exhibits there were arrested by the Nigerian Navy and handed over to us, while some of the arrests were made by us.

Aliyu urged members of the public to report any NSCDC personnel found culpable of oil theft, illegal bunkering and vandalism in the state.

Gov. Nyesom Wike of Rivers had declared war on operators of illegal refineries and announced a reward of N2 million for each reported to authorities.

Several suspects, including highly placed individuals have so far been arrested in the state by the police in connection with the illicit activities.

Meanwhile, Wike has ordered all the 23 Local Government Area Chairmen in the State to hire bulldozers and destroy every identified illegal crude oil bunkering and artisanal refinery sites.

Wike gave the order on Wednesday in a statement issued to newsmen by Mr Kelvin Ebiri, his Special Assistant on Media, after meeting with the 23 Local Government Area Chairmen, the State Commissioner of Police and the Commandant of the Nigeria Security and Civil Defence Corps (NSCDC) in Port Harcourt.

He also asked the Rivers State Commissioner of Police, CP Eboka Friday, to provide adequate security for the local government area chairmen as they embark on the mass destruction of illegal refinery sites across the State.

The News Agency of Nigeria (NAN) recalls that Gov. Wike issued a 48-hour ultimatum to the 23 local government area chairmen on Jan. 14, to provide him a comprehensive list of all illegal refinery sites and their operators within their respective  jurisdiction.

Wike said with the receipt of the list of identified illegal refinery sites, the state government will  provide financial support to the local government area chairmen to hire bulldozers and swamp buggies for the purpose of destroying all the sites.

“I will not relent in this fight. And all of you should hire bulldozers. All those areas where the illegal refinery sites are in the bush, in the creek, clear the place. Government will give you some money to go and hire bulldozers to go and clear the sites so that they will know we are serious,” he said.

According to the Governor, the government will not allow those engaged in illegitimate business to operate in Rivers State.

“One thing I want to say and which is very clear, and like everybody knows, I am not against anybody making money. But, we cannot allow people to make money, while others are dying,” he stated.

Wike acknowledged that since the State government intensified the fight against illegal refinery operators, who are primarily responsible for the discharge of impure carbon particles resulting from the incomplete combustion of hydrocarbons into the atmosphere, the air quality in parts of the state has improved remarkably.

He said he is mindful that as the State government intensifies the war against illegal refinery activities, the cartel behind these illicit businesses will make effort to compromise unscrupulous security agents in the state.

Wike warned that he will personally visit the Inspector General of Police, the Commandant General of the Nigeria Security and Civil Defence Corps (NSCDC) and the Chief of Army Staff in Abuja, to report any of their personnel implicated in illegal crude oil bunkering and artisanal refinery activities in the state.

“You know in Nigeria, we don’t believe that anything can happen. We don’t take the government seriously, but in our own case, they have no choice, they’ll take us seriously,” he stated.

The Governor said his administration cannot fold its arms and watch some deviant persons destroy the environment and health of the citizens while waiting for the Federal Government to come up with action to end the soot crisis in the oil-producing states.