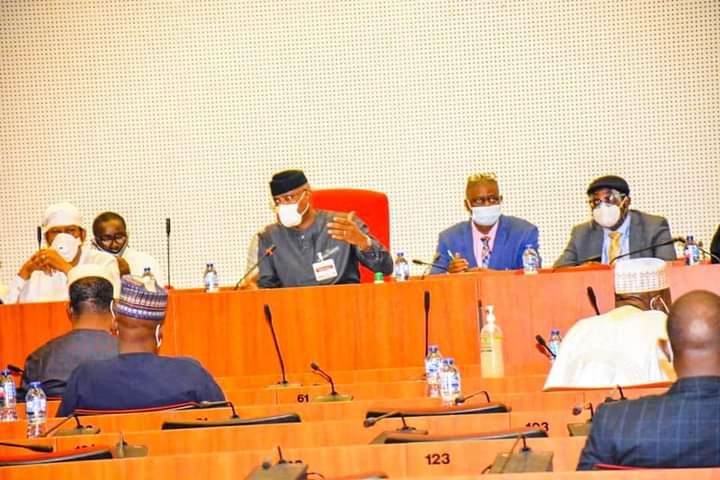 The secretariat of the Senate Committee on Constitution review has identified key areas that need review in the 1999 Constitution of the Federal Republic of Nigeria.

TheNewsGuru.com (TNG) reports Deputy President of the Senate, Senator Ovie Omo-Agege, who is also the Chairman of the committee, made this known following the inaugural meeting of the committee on Thursday.

He stressed that though the National Assembly (NASS) was still on recess, holding the meeting underscored the importance placed on the assignment to begin the process of bringing positive changes to the Constitution.

Recall that the Senate Committee on Constitution review was inaugurated on the 12th of February, 2020 by the President of the Senate, Dr. Ahmad Lawan, following which, the committee held two meetings on the 26th of February, 2020 and on the 3rd of June, 2020, respectively, to work out the modalities for carrying out the all-important national assignment.

Among the major fallouts of the meetings were that the El-Rufai report on restructuring and the 2014 Constitutional Conference report were recommended to be part of the Committee’s working documents.

These two documents have been obtained by the secretariat of the Committee for duplication and circulation to members, Omo-Agege stated.

“As we await the full resumption of our activities at the Committee level, compilation of all the Constitution alteration Bills referred to the Committee and gazetted are being collated for the process of the Committee in due course.

“This assignment is one that must be carried out jointly with the House of Representatives, apart from other stakeholders in the various Houses of Assembly and members of the public.

“Hence, I am in touch with my counterpart in the House to work out the modalities for a harmonious working relationship.

“In pursuant of this, our secretariat has obtained all the Bills for the alteration of the Constitution referred so far to our counterparts in the House of Representatives and we have transmitted ours to them for further legislative activities.

“The secretariat has been working and has identified many areas that need review in the 1999 Constitution from the engagements in the past and they include:

“The need to make the Constitution more gender-friendly and affirm equal rights to women and girls.

“The need to address the challenges of residency and indigeneship.

“The need to address the federal structure of the country to be in tandem with our history and modern realities.

“The need to revisit socio-economic and cultural rights as entrenched in Chapter 2 of the Constitution as fundamental principles of state policy.

“This is a work plan that has been proposed for input. It is more of a road map of the Committee with the aim of presenting our report to the Senate plenary at the end of the first quarter of 2021.

“This Constitution review process presents another opportunity for Nigerians to look at these issues again.

“This review process will therefore be guided by the principle of inclusivity and participation.

“We conducted a mapping of stakeholders that  have been engaging in the Constitution review exercise since 1999.

“We have collated previous reports such he as the 2014 Constitutional Conference Report and the El-Rufai’s report on restructuring which are being analyzed.

“We have also designed several outreach programmes including the utilization of social media to receive and collate the views and opinions of Nigerians.

“At the end of our technical sessions, our team will analyse the contributions and turn them into operations for the relevant sections of the Constitution,” the Senator said.

He further stated that, “In addition, Distinguished  Senators and members of the House of Representatives have initiated Constitution alteration Bills, all of which will be subjected to the relevant legislative process.

“It is in line with this that the Committee is working on virtual conferencing to facilitate its work in view of the COVID-19 pandemic so as to ensure that our meetings within and outside the National Assembly premises are not unduly interrupted and frustrated from holding”.

Senator Omo-Agege said that a target of March 2021 has been set to submit the report of the committee.