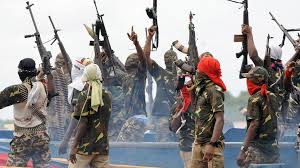 The soldier was said to have been moved from Maiduguri to Lokoja when he resisted fighting Boko Haram insurgents and detained alongside three suspected bandits.

The incident was said to have happened on Sunday night when Lokoja witnessed its first rain in the year.

It was gathered that the army has intensified effort to recapture the escaped bandits and the soldier.

“The Army is making frantic effort to arrest the four suspects. From what we learnt, the soldier was seen with a rifle as he aided the escape of the three bandits.

“He has been in our cell here, waiting for when he will be tried. Unfortunately, when it rained heavily on Sunday, the soldier used the opportunity to escape when officers on duty were asleep.

“As I speak to you, the army has mounted surveillance in every entry and exit point of Kogi State to ensure the escapees are re-arrested,” a source said.

He said: “I have no comment to make as I am not aware of anything like that.”