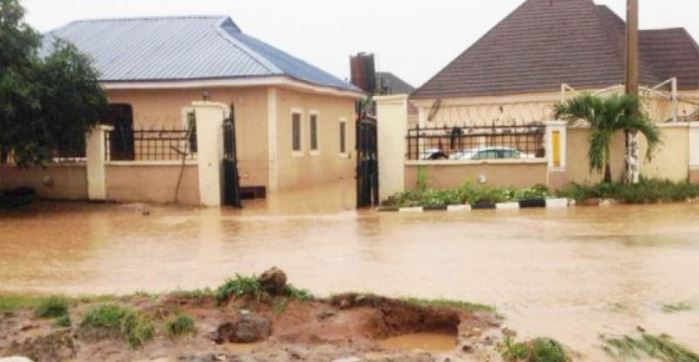 A 17-yr-old housemaid died in a flood that submerged part of EFAB Estate, Lokogoma, Abuja.

The house assistant, TheNewsGuru gathered was unable to leave the house when it was inundated by flooding caused by over five hours of rainfall – from 8am to 1pm on Thursday.

One of the executives of the estate’s landlords’ forum, Shettima Gana Mohammed, said more than 15 houses and two churches were submerged by the flood. “We called NEMA and Fire Service but they did not come but the police were there and other security officers within the estates. They came with the people from facility office in the estate,” Mohammed said.

“We did all we could and saved some of the residents but unfortunately in one of the houses, one of the helps died. A guy, I did not ask his name,” he said.

“The police recovered the casualty and took it to the Federal Staff Medical Centre in Jabi. I saw it, they were trying to resuscitate the person. One of our residents whose house was washed away by the flood came out and was trying to save the man. It was in my presence; one man died, it was the police that carried the corpse,” he said.

Another source within the estate identified the victim as a teenager, named Bala. The Director General of FCT Emergency Management Agency (FEMA), Abbas Idris, however, said the agency was not aware of any casualty due to the flood.

“We did not rescue anybody either dead or alive. The flood affected some of the infrastructure there and some houses but no life was lost. In our intervention the community did not tell us that someone died,” he said. He said emergency officers were dispatched to the scene immediately they got the information.

“From what we assessed there were buildings on the waterways and that was why the water could not have its own access and so it had to overflow.

“Gilmor Construction is there, with FCDA officials to see what they can do if it means pulling down some structures to allow access for the water and then all over the FCT the department for facility maintenance has been instructed to desilt drainages and then the development control are going round to ensure that structures on waterways are pulled down,” he said.