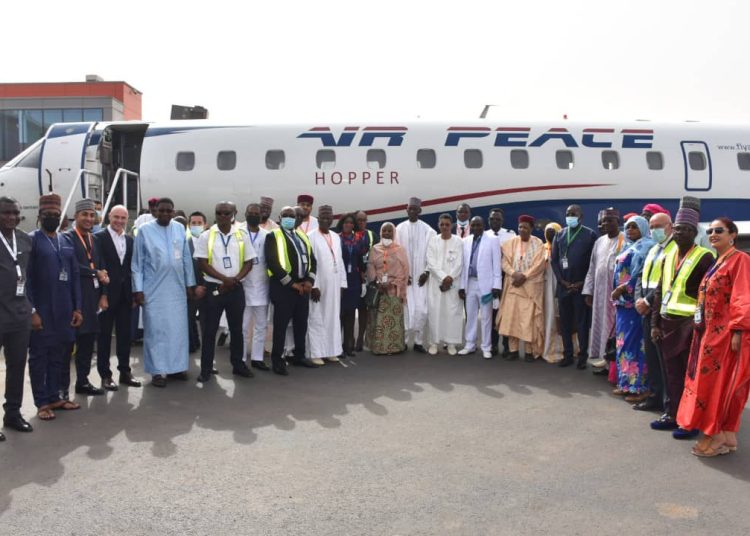 Air Peace has begun direct flights into Niamey, Niger Republic. This was disclosed by the spokesman Mr Stanley Olisa, in Lagos on Saturday.

Mr Stanley Olisa stated that the inaugural flight was conducted with one of the airline’s Embraer 145 jets, from its subsidiary- Air Peace Hopper.

He quoted the leader of the Air Peace delegation on the flight, Capt. Augustine Kamano, as saying that Niamey had always been on the airline’s radar.

This is especially as the airline was poised to expand its footprints across the West African coast and interconnect different cities in the sub-region.

Olisa also quoted Kamano, the Director of Flight Operations, as saying that Niger Republic and Nigeria are good neighbours.

He said also that Air Peace was excited to serve as a strategic means of fostering the already existing positive relations and further cementing the ties between the two countries through air travel.

“We are determined to reduce the air travel burden of Africans, and this will continue to propel our route expansion as well as fleet modernisation programme.

“Air Peace has accomplished so much in just seven years of operation, as we now have a network of 20 domestic routes, seven regional routes and two international destinations.

“The international destinations include Johannesburg, which we launched in December 2020.

“Also planned for launch in the future are routes such as Houston-USA, Mumbai-India, Guangzhou-China and London. We’re constantly reviewing our route network in line with the travel needs of Africans,’’ Kamano said.

He expressed gratitude to Niger Republic authorities and the Nigerian Government that made the airline’s entry into Niamey possible.

Kamano also promised that Air Peace would work concertedly with all relevant aviation stakeholders to ensure the new route is maximised for air travellers.

In her remarks, the Nigerian Deputy Ambassador to Niger Republic, Aisha Kabiru, emphasised that Air Peace’s entry into Niger would boost socio-cultural and economic ties between both countries.

She noted that the development would also ease the burden of air travel for Nigerians and Nigeriens to connect both destinations, especially for commercial purposes.

Kabiru thanked Air Peace for always rescuing Nigerians, citing the airline’s evacuation record and reiterated the commitment of the Nigerian Embassy in Niger to supporting its operations in the neighbouring country.

In February, Air Peace announced plans to kick off three weekly flights into Niamey from Abuja and Kano.

The airline also has in the works two other African destinations – Malabo in Equatorial Guinea and Kinshasa in the Democratic Republic of Congo.