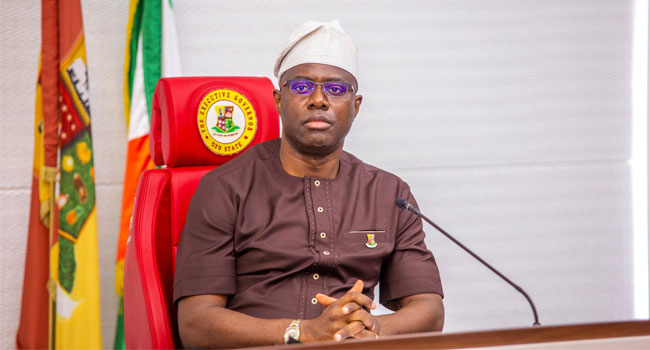 Oluseyi Abiodun Makinde, the governor of Oyo state has commiserated with the people of Iseyin over the death of Aseyin of Iseyin, Oba Abdul Ganiyy Salaudeen.

Makinde who was represented by his Deputy Chief Adebayo Lawal, urged the people to take solace in God, promising that his administration would continue to support the ancient town in term of development.

The remains of Aseyin of Iseyin, Oba Abdul Ganiyy Salaudeen, were on Monday evening interred at Igbo Itan cemetery, designated for the resting place of Iseyin traditional rulers.

Earlier, prayers session was held in the inner field of the palace.

According to him, it will be business as usual between the town and my administration, though, Kabiyesi is no more, the relationship remains cordial.

“All of those developmental projects that are ongoing will not be slowed down simply because the kabiyesi is no more.

“I assure our people to feel free to knock on my door as the late oba used to do when he was alive for whatever request and I will listen to them,” he said.

On behalf of the people of Iseyin, Mr Muftau Abilawon, the Chairman of Iseyin Local Government area, thanked Makinde for his support to the late oba throughout the period he was ill.

Abilawon said that the government stood firmly by the late traditional ruler financially and morally.

He also thanked the Deputy Governor who led the state government delegation on the condolence visit.

Newsmen recall that Oba Salaudeen, aged 62, died on Sunday at the University College Hospital (UCH) during a prolonged sickness.

He was a practising veterinary doctor before he ascended the throne in 2007.

Edevbie vs Oborevwori: PDP in Court as appellant in Abuja