Nigeria’s former Vice President, Atiku Abubakar has called on Senator Elisha Abbo to publicly apologise to the woman he attacked in an Abuja sex toy shop and surrender himself to the police.
Recall that Senator Abbo is from Atiku’s state, Adamawa.
The Senator was seen on video that has gone viral, assaulting the lady.
The news of the attack went viral after a video recorded by the Close Circuit Television (CCTV), installed in the shop was shared on the social media, an act which is said to have embarrassed the police authorities.
Atiku, in a statement on Wednesday said he had seen the video involving Abbo assaulting a woman, saying that the act was sad and inexcusable.
He said he knew the senator quite well, but that the law was clear as leaders must leave by example.
The Peoples Democratic Party, PDP, Presidential candidate in the last presidential election advised Abbo to publicly apologized and voluntarily hands himself over to the police.
In his words: “I have seen the alleged assault video involving Sen. Elisha Abbo. The video is sad, inexcusable. I know the Senator quite well. But the law is clear and leaders must lead by example.
“‪‪I advise him to publicly apologize, voluntarily go to the police and show a good example expected of a young leader. I also call on our party, the PDP to take necessary disciplinary action and the Nigerian Police to ensure the law takes its full course.” 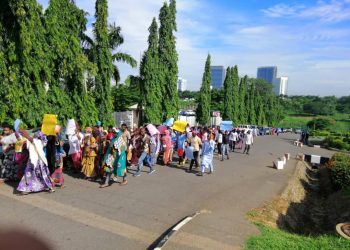