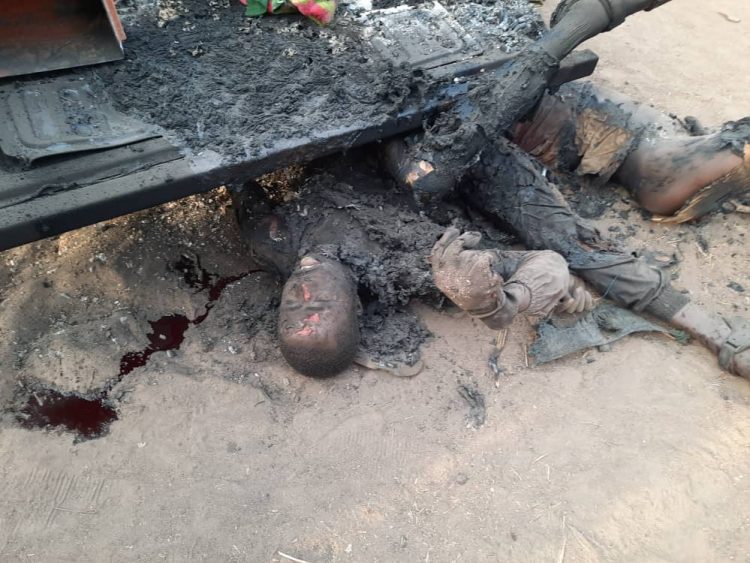 The operation was carried out by troops of Sector 2, Operation LAFIYA DOLE (OPLD) at Buni Gari area of Yobe.

This was disclosed by the Commander, Sector 2 OPLD, Brig Gen. Lawrence Araba while briefing the Chief of Army Staff and his entourage on Sunday.

Consequently, the Chief of Army Staff, Lt Gen Tukur Buratai, applauded the troops for their gallantry and resilience that led to the killing of the 105 terrorists at Buni Gari in Gujba Local Government Area of Yobe state on Saturday the 18th of April 2020.

He gave the commendation when he visited the injured troops at the Field Ambulance Logistics Base 3 Damaturu and Special Forces’ School in Buni Yadi on Sunday.

The visit was sequel to the successes recorded by the troops in neutralising 105 Boko Haram and ISWAP Criminals who attempted to infiltrate/attack Buni Gari Village in Yobe State on the 18th of April 2020.

Buratai visited two officers that were wounded in action during the Buni Gari encounter and other soldiers already on admission at the medical facility in Damaturu before proceeding to the Special Forces’ School in Buni Yadi where he and his entourage were briefed on the incident by the Commander, Sector 2 OPLD, Brig Gen Lawrence Araba.

Brig Gen Araba informed him that the recent success was as a result of intelligence report which revealed plan by Boko Haram/ISWAP terrorists to attack the village.

Abba Kyari: An enigma even in death - Ehi Braimah