Just in: Amaju Pinnick tenure as CAF Vice President comes to an end 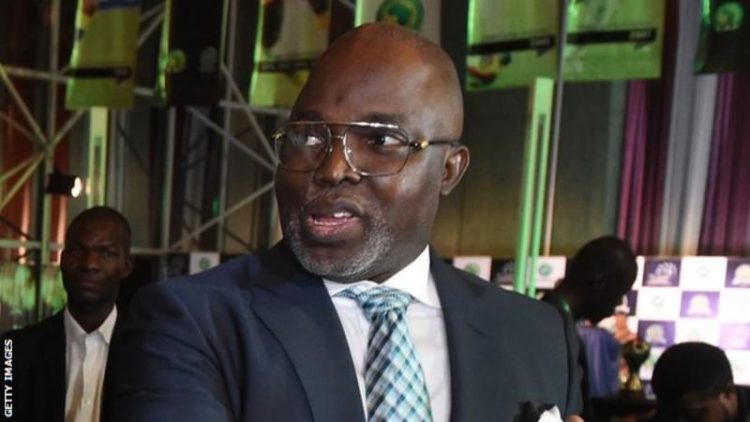 Amaju Pinnick has lost his role as 1st vice-president of the Confederation of African Football (CAF) and has been replaced by South Africa’s Danny Jordaan.
This came as a result of a new election conducted by CAF today.
In a statement, the NFF COMMUNICATIONS DEPARTMENT, titled Pinnick’s Tenure as CAF 1st Vice President Expires, however, denounced insinuations in some quarters that Amaju Pinnick was sacked by the CAF President.
The statement read:
“The term of the President of the Nigeria Football Federation, Mr. Amaju Melvin Pinnick as the 1st Vice President of the Confederation of African Football along with that of the 2nd and 3rd Vice Presidents expired today.
In line with Article 22(4) of the CAF Statutes, every two years when elections are held at the CAF Congress (as took place today), the CAF Executive Committee on the proposal of the CAF President, elects a 1st, 2nd and 3rd Vice President respectively from among its members.
Significantly the renewal of Amaju Pinnick’s tenure was not proposed by the CAF President because of fundamental differences on focus and direction.
Pinnick accepted the decision of the President as it aligned with his own view having considered matters surrounding the administration of African Football which has dovetailed into the Nigerian Football space. He will however remain a bonafide member of the CAF Executive Committee to continue with his madate as such.
Pinnick further noted “It has however been an excellent opportunity to serve as the number two football administrator in the entire African continent and my commitment to the game is perpetual while my support for my colleagues in the Executive Committee remains steadfast. I congratulate, Omari, Lekja and Danny on the assumption of their new roles as 1st, 2nd and 3rd Vice CAF Presidents respectively”.
Pinnick’s exit means a reshuffling of Ahmad’s vice-presidents, with Constant Omari of DR Congo and Moroccan Faouzi Lekjaa moving up from second and third vice-president respectively.
Jordaan, who played a key role at the 2010 World Cup in South Africa – the only time the tournament has ever been played on the continent – will now act as third vice-president.
Lekjaa, meanwhile, is facing a possible ban by CAF after the Ethiopian Football Federation accused the Moroccan federation president of assaulting the referee following the African Champions League final between Wydad Casablanca and Tunisia’s Esperance.
After CAF’s Disciplinary Committee was unable to reach a verdict earlier this month, the case was sent back to African football’s ruling body.
Samoura, meanwhile, will start her role on 1st August, renewable after six months should both CAF and FIFA agree, in the hope of overseeing widespread administration reform in Africa.
CAF has been plagued by a series of scandals in recent times.
“We all suffer when we see what is going on here,” Infantino told the presidents of Africa’s member associations as they gathered for a General Assembly in Egypt on Thursday.
The FIFA president also addressed comments made to BBC Sports by Sepp Blatter, who said the Samoura move flouted the statutes of football’s world governing body while also representing a ‘new aspect of colonialism.’
“What does it mean, colonialisation?” the 49-year-old asked. “I don’t know. It’s not part of my vocabulary. But I do know what it means to team up.”
The Egyptian capital, Cairo, will host the Africa Cup of Nations final on Friday when Senegal go in search of a first title against 1990 champions Algeria.