Court sentences 2 ‘yahoo boys’ to 1 year in prison each

A High Court, sitting in Ilorin on Thursday sentenced  two applicants to one year in prison each for posing as white women to swindle job seekers.

The presiding judge, Justice Sikiru Oyinloye sentenced Johnson Okuselu, 23 and Saheed Olanrewaju, 25 after they pleaded not guilty without an option of fine.

Oyinloye said the sentence followed a plea bargain agreement, entered upon by the prosecution and defence counsel and the evidence admitted into court.

”Following the accused acceptance of guilt, I therefore sentence you to year in prison each in Oke-kura prison yard.

”The sentence will begin from April 28,” the judge held.

Earlier,  the Economic and Financial Crimes Commission (EFCC) Counsel, Mr A.A. Adebayo told the court that sometimes in April, Okuselu pretended to be Ms Blessed Saviour, a white woman, who promised to provide a job in  the U.S. to one Omni Guzman.

The offence, he added, contravened the provisions of sections 95, 321 of the Penal Code Law and punishable under Section 322 of the same law.

Testifying, Mr Akanbi Sadiq, an investigator with the EFCC, told the court that on April 28, operatives of the commission, arrested the defendants at the Ilorin International Airport.

He said that when they were arrested, operatives seized an IPhone from Olanrewaju.

” When we searched the phone, we discovered that the defendant also created another email, using the name James Kaik, with email address, [email protected] com.

“Using the picture of a white man, they deceived people into v=believing that they can get jobs for them,’ he testified. 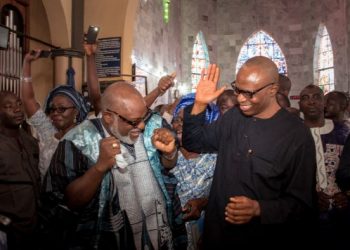