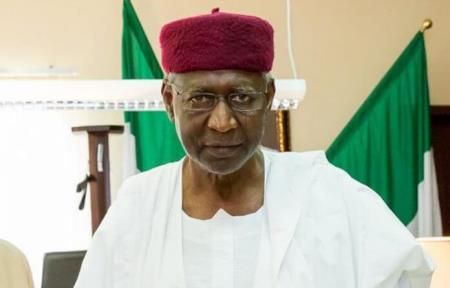 The wife of late Chief of Staff (CoS) to President Muhammadu Buhari, late Abba Kyari, Hajiya Hauwa Kulu, has been turbaned as the First ”Gimbiya” (Princess) of Jama’are, by the Emir of Jama’are, Alhaji Nuhu Wabi III.

The Emir of Jama’are, Alhaji Nuhu Wabi III, has turbaned the wife of late Chief of Staff (CoS) to President Muhammadu Buhari, late Abba Kyari, Hajiya Hauwa Kulu as the First ”Gimbiya” (Princess) of Jama’are.

The Emir while Speaking at the ceremony in his palace on Sunday, described her as a “true daughter of Jama’are who has done so well for the development of the entire Emirate”.

”With this installation, the women of Jama’are now have a representative in the Emirate Council, their voices can now be heard more clearly.

“I am fulfilled that I now have a real daughter of the Emirate in the Council,” he said.

Wabi described Hauwa as an amiable woman who is concerned about the well-being of her immediate people as well as the development of the Emirate.

”She is qualified to be recognised because she possesses all the three reasons that people are recognised for turning in an Emirate.

”This includes excellence in a particular field of endeavour, meaningful contributions to the development of the Emirate and belonging to the royal family.

“We expect more from her, that is the task on her shoulders now,” he said.

Responding, Hauwa thanked the emir for finding her worthy of the recognition which came to her as a surprise.

She promised to continue to contribute her quota to the development of the Emirate and the people of Jama’are who she said have really impacted positively in her life.

The new Gimbiya expressed happiness over the recognition which she said will linger on for a long time in her memory.