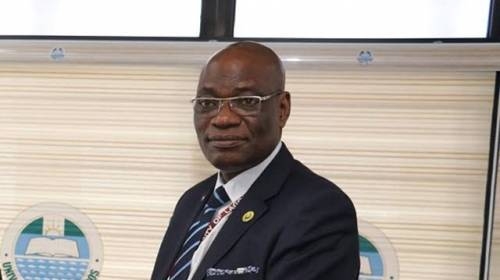 Information reaching TheNewsGuru.com, TNG has it that suspended Vice-Chancellor of the University of Lagos, Prof Oluwatoyin Ogundipe, may be reinstated today (Wednesday).

Officials at UNILAG and the Ministry of Education confirmed the development.

The Minister of Education, Adamu Adamu, is expected to announce Ogundipe’s reinstatement at a press conference on Wednesday.

It was gathered that the press conference would hold in Abuja at 12pm.

According to one of the officials who works in the office of the VC, Ogundipe is aware of the Federal Government’s plan to reinstate him.

“We are all expecting the official announcement. He received a call from Abuja already,” the official who prefers anonymity said.

When contacted, the spokesperson for the Ministry of Education, Ben Goong, confirmed that the minister would be addressing the press on Ogundipe’s suspension.

When asked if Ogundipe has been reinstated, he said, “I can’t say yes or no. The minister will be addressing the media tomorrow (Wednesday). By then, you will get the information you need.”

Meanwhile, the suspended VC is yet to issue any statement regarding the development.

Recall that Pro-Chancellor and Chairman of Council of the University of Lagos, Wale Babalakin, and Ogundipe, were directed to recuse themselves from official duties, pending the outcome of the Special Visitation Panel set up by the President, Major General Muhammadu Buhari (retd.), on August 21, 2020.

The UNILAG’s Governing Council, headed by Babalakin had removed Ogundipe at its meeting in Abuja on Aug. 12, over allegations of infractions and gross misconduct.