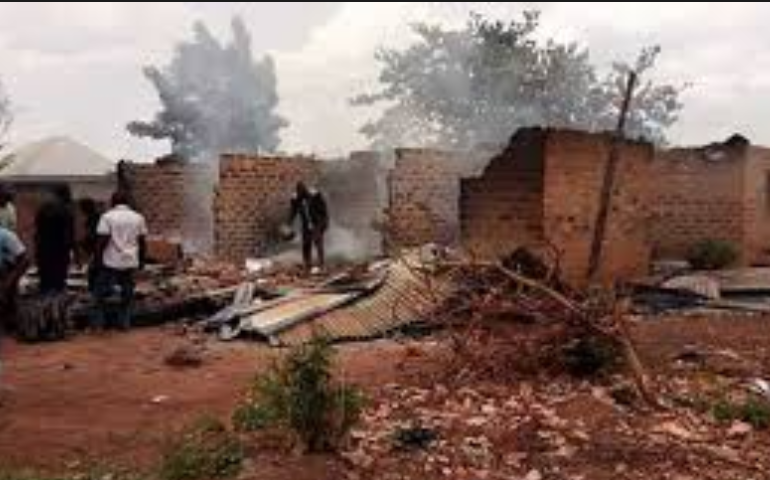 No fewer than 18 persons were, again killed, on Wednesday night, during a fresh attack by suspected Fulani herdsmen in Ariri village of Miango District in Bassa Local Government Area of Plateau State.
TheNewsGuru gathered that eight members of a family were murdered in cold blood in the attack and four others inflicted gunshots injuries when the attackers invaded the village while the villagers were deeply asleep.
One of the villagers, who gave his name as Lawrence Ishaku, on Thursday morning, confirmed the incident and said eight people were killed in one house and 10 others in different houses.
His words, “Gunmen attack Ariri village yesterday (Wednesday) in Bassa Local Government Area and killed 18 persons. Eight of the deceased persons were members of one family while 10 are from different houses and four persons were badly injured.
“The death bodies have been given mass burial while there is tension in the community.
“We are neglected by government and security agencies. Nobody is acting to protect us. We are being killed on daily basis by herdsmen and nobody is doing anything to stop the killings.”
He said those injured are currently receiving treatment at Enos Hospital, Miango.
“We are always in a security meeting without result and no arrest has been made. Now Ariri is displaced. This is too bad and evil genocide going on in a democratic era.
“We are pleading and calling on Amnesty international and international committee on Red cross to please come to our aid. We need their help. We are losing hope on the government we hope for.”
He noted that people were being killed in the community by Fulani herdsmen even when the community was under curfew. “I want Government and security agencies to take proactive steps and stop the incessant killings.”
Police Public Relations Officer (PPRO) in the state, DSP Matthias Terna Tyopev, confirmed that attack and said the Police Commissioner was going to the village and after then, he would confirm the casualty figure.