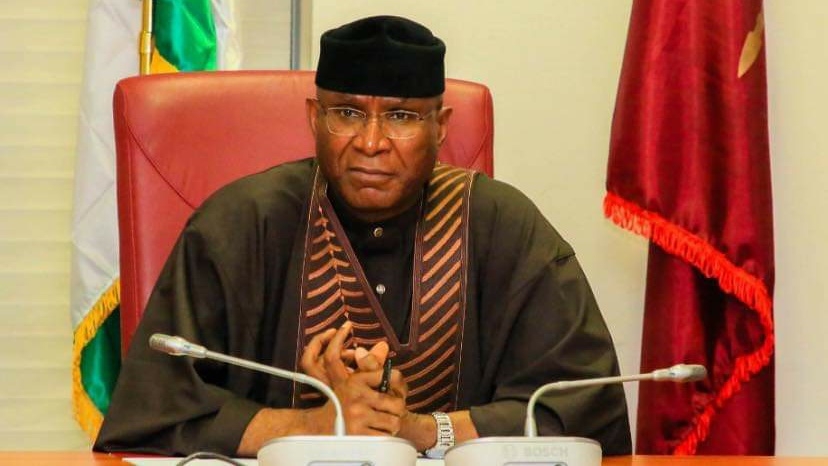 The Deputy President of the Senate, Sen. Ovie Omo-Agege, has debunked claims that he voted against the electronic transmission of results.

The senator representing Delta Central Senatorial District in the Senate said unequivocally he did not vote against the electronic transmission of election results.

According to him, his decision was guided by the reality on ground given the fact that according to data from the Nigerian Communication Commission, E-Transmission of results is only possible in less than 50% of all electoral domains in the country.

“Our people should therefore discountenance any mischievous commentary or speculation to the contrary. Those grandstanding with mischief as their only weapons of offence are only labouring in vain. Their defeat was perfectly executed by a majority of the Nigerian Senate. Not being democrats, they believe they may still achieve their sinister agenda through misinformation and outright falsehoods. That will not stand,” he said.

He made this known in a statement signed by Prince Efe Duku, Special Adviser to the Deputy President of the Senate on Legislative & Plenary Matters. According to Omo-Agege, while he supports Electronic Voting (E-Voting) as contained in Clause 52(2) of the Electoral Reform Bill, which has been duly passed by the Senate, he only voted for an amendment to Clause 52(3) of the Bill (on E-Transmission) to guarantee secure E-Transmission of all election results and uniform application of E-Transmission everywhere in the country, not just some parts of it.

“In simple terms, The Obarisi of Urhobo land voted to support an amendment that ensures, for example, that INEC does not transmit only election results in Urhobo electronically while other areas may have their results transmitted otherwise and safely. For him, all election results must be treated equally under a uniformly applied standard.

“Indeed, Senator Omo-Agege as an erudite lawyer knows that it is unconstitutional for the National Assembly to enact an Electoral Act that is inherently discriminatory in its design and intended application. For him, to pass the test of constitutional validity, the law must apply uniformly to all electoral domains in the country, otherwise such a law could be easily struck down by a court if taken for judicial reviews by those who may be negatively impacted

Omo-Agege further said in arriving at his “thoughtful decision, he was guided by unimpeached data from the Nigerian Communication Commission (NCC) that E-Transmission of results is only possible in less than 50% of all electoral domains in the country.

“For him, the message from this data is that if INEC is allowed unfettered E-Transmission power, then there will be unequal treatment of election results and that would be a fundamental law making flaw. So he stood firm to prevent such a move that would have led to a needless waste of legislative resources and time,”

“In view of the foregoing, we hereby confidently assure our people that all is well as far as the ongoing Electoral Reform is concerned. Senator Omo-Agege as a leading champion of the reform since he first stepped into the Red Chamber in the 8th Senate is protecting the best, strategic interest of our people and the nation,” the statement read.

The statement also said “Omo-Agege knows that Urhobo as Nigeria’s 5th largest ethnic nationality does not countenance false premises in decision-making, especially by those who are privileged to be chosen as leaders. He is therefore accordingly properly guided in all his actions and inactions as a lawmaker because he knows that laws once enacted often have far-reaching ramifications, sometimes beyond the lifetime of the legislators who make them.”

Enduring to the end - Femi Aribisala

School children abduction, I told you so - Dele Sobowale