by Emman Ovuakporie
in Nigeria
Reading Time: 2 mins read
A A
0 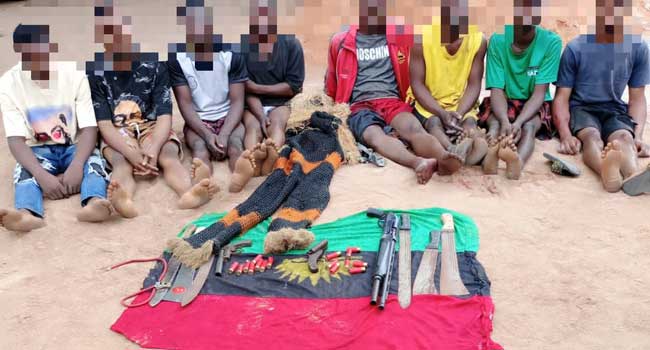 An 18-year-old suspect and seven others have been nabbed for allegedly attacking the Agwa Divisional Police Headquarters in Oguta Local Government Area of Imo State.

Gunmen had on Saturday stormed the facility, killing no fewer than four police officers. They also burnt down parts of the police station.

Police arrest three with 150 bottles of “Skuchies” in Lagos

But two days after the incident, the Imo State Police Command identified the teenage suspect as Obioma Chibuike from the Agwa community.

The suspects paraded by the Imo State Police Command on August 8, 2022.
The other suspects whose ages range from 19 to 52 years are Achazie Chidiebere, Onyedikachi Nwadike, Anayo Onyemere, Ifeanyi Mboyi, Chukwudi Onyeausi, Obodo Promise and Ifeobu Ebubechi.

According to him, the hoodlums engaged police operatives in a gun duel and due to the superior firepower of the operatives, some of the suspects escaped while eight of the hoodlums were arrested.

“The Command’s tactical teams, on the 06/8/2022 at about 0300hrs, after a diligent gathering of credible intelligence, raided some identified criminal hideouts located between Agwa and Izombe communities in Oguta Local Government Area of Imo State, where the hoodlums, on sighting police operatives engaged them in a gun duel, in an attempt to escape arrest; but were overwhelmed by the superior firepower of the operatives,” the statement read.

Some of the items recovered include one pump action gun, two locally made guns, six cutlasses, one Biafran flag, eight live cartridges, eight expended cartridges and one masquerade apparel.

The police spokesman appealed to indigenes of the state to make policing a collective responsibility and also join hands with the Command and other security agencies in the fight against criminalities by reporting any suspicious activities around their neighbourhoods to the nearest police station.