Inside story of Buhari’s meeting with Security Chiefs 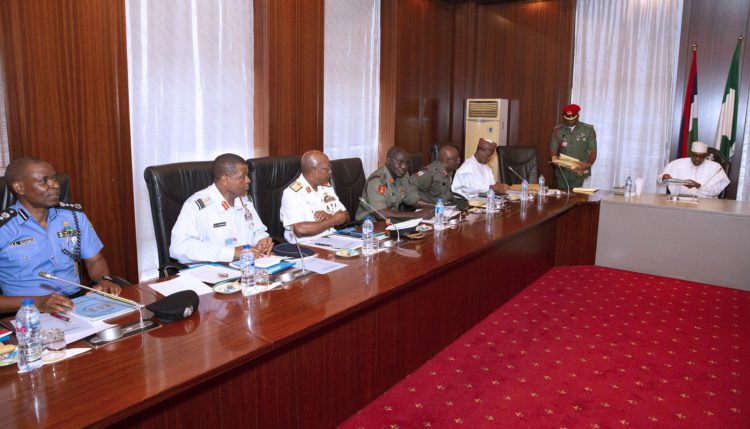 The Federal Government has taken delivery of two fighter helicopters to boost the ongoing fight against insurgency and banditry in the country.

The Chief of Air Staff, Air Marshal Sadique Abubakar, disclosed this when he briefed State House correspondents on the outcome of the meeting of Security Council at the Presidential Villa, Abuja, on Friday.

The meeting was presided over by President Muhammadu Buhari.

Abubakar also announced that additional fighter helicopters and other military hardware would be supplied to the nation’s armed forces to enhance their capacity in the battle fields.

He said: “In terms of procurement of platforms, substantial number of these equipment are expected by the end of February, some of the equipment we are acquiring have started arriving.

“For the Nigerian Air Force, two helicopter gunships arrived on the Jan. 15 and we are now in the process of putting them together to add to whatever we have already.

“It is going to be funded and the whole idea is to ensure that Nigeria is secured and citizens can go about pursuing their legitimate aspirations without any hindrance.’’

According to Abubakar, Nigeria is collaborating with its neighbours to completely end the Boko Haram insurgency.

“We are doing everything with other sister countries in the Lake Chad basin, working together to ensure that Boko Haram terrorism is brought substantially to an end as much and as quickly as possible,” he said.

He, however, appealed to all Nigerians to contribute their quota towards addressing security challenges troubling some parts of the country, NAN reports.

He said: “Our appeal is for all Nigerians and other stakeholders, local and state governments, to join hands with the Armed Forces of Nigeria to ensure that our country is secured rather than looking at other methods that are likely going to negate the national community policing policy that the federal government has approved.”

He assured that the nation security agencies were ready to contain all cases of insurgency or banditry in any part of the country.

He added that the agencies would secure the lives and property of all citizens as well as the territorial integrity of the nation at all times.

“What we want to do is to reassure Nigerians that the Armed Forces and indeed other intelligence and security agencies in Nigeria are going to continue to work round the clock to ensure that our country is secured.

“We will ensure that nobody undermines the territorial and national sovereignty of Nigeria.

“We are going to keep a very close watch on what is going on and with the equipment that we are getting.

“Definitely the challenges that we are facing in some of the theatres of operation particularly the North-East will be addressed adequately.”

He added that the meeting appraised the security situation across the country and was satisfied with the progress being made.

“This meeting was called to critically evaluate what the Armed Force of Nigeria as well as other security and intelligence agencies are doing with regard to ensuring that the territorial integrity of Nigeria is not undermined by any individual or group of individuals.

“The appraisal also looked at the emerging situation in some of our areas particularly acts of banditry in some of the North-Western States and other parts of the country.