Disturbed by the persistent state  of anarchy in the North Esdtern part of Nigeria, lawmakers in the House moved that the sources of income of Non-Governmental Organisations, NGOS should be investigated immediately.
This was contained in  a motion tagged  ‘Need to get a special security fund to fight insurgency in the north east, ‘ sponsored by the Whip of the House,Hon Mohammed Tahir Monguno, APC, Borno.
This is as a result of the the lawmakers special session on Monday over insecurity in Nigeria.
While leading the debate Hon. Monguno expressed regrets over the unprecedented level of insecurity which has made national security a major issue for the Nigerian government.

The lawmakers also underscored the need for the House to interface with US Congress and other Parliaments with the view to overcome all regulations that bar Nigeria’s security agencies from purchasing arms and ammunitions from those countries.

Despite the daunting task posed by the security challenges, Hon. Monguno applauded the effort of President Muhammadu Buhari towards curtailing insecurity in Nigeria as well as other measures aimed at deterring or disrupting potantial attacks.

“The House is aware of the interaction of the leadership of the House of Representatives with the security Chiefs on the deteriorating security situation in our country.

The House further appreciates the efforts of the Security agencies in curbing the menace of insecurity despite the challenges they face.

“The House is cognizant of the need for new strategies and expedited action to ensure that insecurity in Nigeria is reduced to the nearest minimum,” he noted.

Sources privy to the closed door session security meeting held on Monday between the leadership of the House and Security Chiefs acknowledged the frustration of the Security agencies over untoward affiliation of some of the NGOs with the promoters of the terrorist group who provided suspicious fund to aid their activities in the region.

In the same vein, the House mandated all relevant Committees to probe the activities of various Non Governmental Organisations (NGOs) in the North East geopolitical zone with the view to unravel their role in aggravating the spate of terrorists otherwise known as Boko Haram.

To this end, the Speaker of the House of Representatives, Hon. Femi Gbajabiamila who presided over the plenary session referred the motion to the Committees Army, Defence, Air Force and Police and report back to the House for further legislative action. 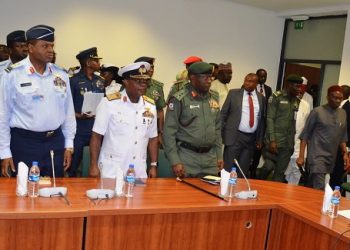 Insecurity: Understanding CNG as a virus