Kidnappings: Soldiers should travel by road not rail – Senate

ADVERTISEMENT
ADVERTISEMENT
ADVERTISEMENT
By Emman Ovuakporie, Abuja
… insist they should travel by road
…raise alarm over kidnappers issuing notice to residents
Disturbed by the spate of kidnappings in the country, the Senate wants soldiers to stop travelling by rail to Kaduna from Abuja since Kidnappers don’t attack them.
It said kidnappers and bandits have taken over major roads, villages and towns, including the nation’s capital, Abuja.
This development was sequel to the adoption of a motion, through a point of order, raised by Senator Dino Melaye, PDP, Kogi West, on the growing case of kidnapping along Abuja-Lokoja roads and other parts of the nation.
Melaye recalled that the number of travelers that had been kidnapped in the last two weeks cant be quantified on that axis. He said eight, 11 and 18 people were recently kidnapped in September alone along that road.
He explained that “In every part of the country, people are being kidnapped. Security agencies should secure roads across the country. Security agencies should protect the lives of every Nigerian. Something more aggressive must be done.”
Minority leader of the Senate, Enyinnaya Abaribe, also expressed his frustration. He said he is out of new ideas on how to tackle the issue. He urged security agencies to come up with new ways to tackle the issue.
“What do we need to do that we have not done. Maybe we need to do something abnormal. But what is that abnormal thing we need to do to solve this problem? Those of us with access to security still travel to Kaduna using the rail. We have abandoned the roads because of kidnapping.
“All of a sudden, soldiers are not held by kidnappers. This is a serious issue and must be treated with every seriousness,” he said.
Former governor of Gombe State, Danjuma Goje, revealed how kidnappers recently issued notices to some residents in his state in his state. He said the daredevil kidnappers issued a similar notice in a market in Gombe State.
He said: “There is no issue disturbing Nigerians more than this issue. It used to be limited to some people. Today, nowhere is safe. Abuja is not safe anymore. They now kidnap in Asokoro.
“Kidnappers went to the market in Gombe and had the guts to issue notices to people to either meet their demands or they will be kidnapped. Many villages were threatened and the university was almost closed down. They kidnap everyday and this is bad.”
Worried by the growing menace, the Senate, has for the umpteenth time, called on security agencies to adopt a new approach that will address the growing trend.
It called on security agencies to adopt new technologies to track activities of kidnappers and bandits carrying out attacks in different parts of the country.
President of the Senate, Ahmad Lawan, while intervening, said a new radical approach must be adopted. He said while more funds should be allocated to tackle security concerns, he, however, insisted that the expenditure must be justified.
“We need to do something differently. The way the security structure is designed, they can’t deliver. Our committees over sighting security agencies should take up this issue and follow it through. Kidnappers and bandits use telephone lines to negotiate. We will be a big more radical. We may give security agencies more funds. They need to give account.
“We must insist that security agencies must not join the problem. Security agencies should stop dragging the train with us. Let them use the roads. It’s time for our security agencies to go technological. They can deploy drones,” Lawan said.
It waa also revealed that there are plans to come up with an anti-kidnapping legislation which is expected to be domesticated in states.
Tags: KidnappingsrailroadSenatorssoldiers
ADVERTISEMENT 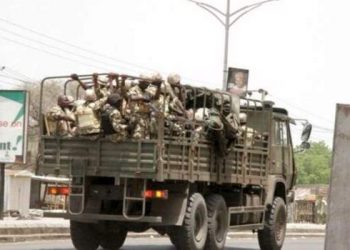